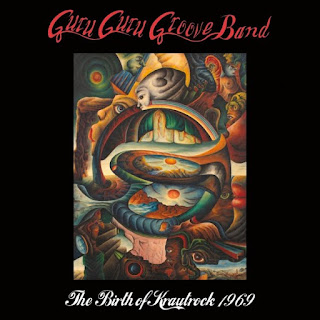 Los Angeles - A newly discovered gem finally sees the light of day courtesy of Guru Guru founding member of Mani Neumeier! Titled “Guru Guru Groove Band – The Birth of Krautrock 1969”, this historically important release was recorded in a small studio in Heidelberg Germany 1969 with Neumeier and future Guru Guru member Uli Trepte, as well as a host of guest musicians, performing a collective free style modal improvisation that would form the foundation of many Krautrock bands to come!

“It was the year 1967, when Mani Neumeier and Uli Trepte left the Free Jazz Trio Irene Schweizer Group. It was the time of a musical revolution, and a sense of change was in the air. When they first heard Jimi Hendrix on the radio, they were so turned on by his tripped out sound that they decided they wanted to create something radical that hadn't been heard or done before. Drawing more musical inspirations from the likes of The Mothers of Invention, Karl Heinz Stockhausen, Indian music, Albert Ayer, and Pink Floyd, Mani Neumeier and Uli Trepte developed the concept of collective free style modal improvisation. Each musician and instrument was supposed to play an equally important role. They had a huge sound, which was dominated by the use of two full Marshall stacks and Mani Neumeier's fluent and inventive drum style. In the first half of 1968, they formed their own sound. The first studio session took place in Heidelberg, Germany. It was a sound expedition recorded on LSD, with several guests on sax, voice and guitar. The band told the engineer that they wanted to play all night. The music was fed through an echo machine to add to the spaced out feel. Now forty years later, Mani Neumeier discovered these very recordings, which can be heard on this album for the very first time! All tracks were recorded two years prior to the first GURU GURU album UFO, which came out in 1970. They were also recorded five years before anyone used the term Krautrock. So here it is, the birth of Krautrock! You better believe it!” – Jurgen Engler

“Guru Guru Groove Band – The Birth of Krautrock 1969” is available on both CD and a special 200 gram white label, hand stamped vinyl pressing!