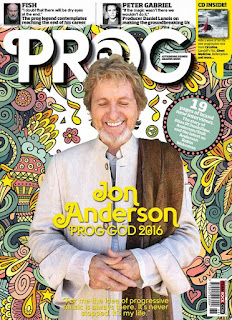 London, UK – Music legend Jon Anderson will be presented with the Prog God award at this year's Progressive Music Awards, in association with currencies.co.uk, which will be held at London’s Underglobe on September 1, 2016! This very special honor is awarded to musical innovators within the world of progressive rock music and sees Anderson joining such music luminaries as Rick Wakeman, Ian Anderson, Peter Gabriel and Tony Banks, in collecting the prestigious award.

Says Jon “After all these years, it’s just wonderful to be getting this very special award. Music has guided me along to this point in my life and I’m forever excited about the new and progressive musical adventures I am given by the gods of music. Making music is like breathing to me, and I am blessed to be able to create music every day. A very grateful and humble thank you.”