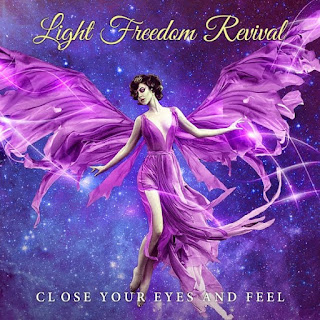 Toronto, Canada - Exciting project Light Freedom Revival, based in Toronto, Canada, has just released its debut single titled “Close Your Eyes And Feel.” The project is led by Canadian singer-songwriter John Vehadija who is teaming up with the likes of Billy Sherwood, Oliver Wakeman and Eric Gillette for his highly anticipated upcoming album due for release this Fall.

Based on John’s interpretation of reunion, “Close Your Eyes And Feel” tells the story of a short-lived romance between a couple who discover that they were bound by their love in a previous life. Faced with the decision of accepting their interlocked souls or searching for a fresh start, the pair cannot resist their infinite compassion for one another. In the end, they are brought together once more to represent the power of history in every loving relationship.

John, who wrote the track, said: “This song stayed with me for a while, I had to get it out there!”

Accompanying John, who also performs lead vocals on the track, is Marisa Frantz (lead vocals and violin) who claims: “I love the final mix of the song. Very full sound. Nicely done.”

Jamie Glaser (acoustic guitar) added: “I wanted to get the right attitude, cuz it’s such a cool track!”

John explained: “The contrast between the symphonic and the remixed versions was chosen to symbolize the difference between the past and present lifetimes.”

These unique approaches not only showcase the astounding versatility of Light Freedom Revival but also bring the original melody of “Close Your Eyes And Feel” into thrilling new genres.

“Close Your Eyes And Feel” was mixed by John Vehadija, remixed by the Kinkades and produced by Positive Imagination Media.