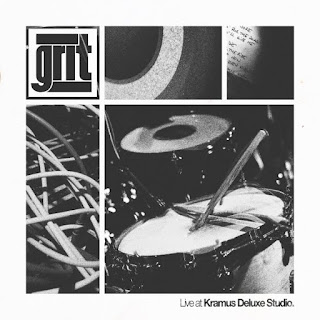 One EP - three tracks, recorded live in a studio, in lieu of an introduction.

13 minutes of raw energy meant to capture the essence of human interaction, in the instant, without a safety net. The Parisian four-piece band GRIT has been gaining traction in the French capital over the recent months, and has elected social networks as their home turf to campaign and deliver an ambitious and brutally energetic debut. Their recent shows have inspired their audiences to exert themselves beyond the usual limits, and to experience the kind of release you feel working the punching bag, or naked, with the right person (not that the two have anything in common - let’s be clear, let’s keep it clean).

GRIT, you say? What exactly are we talking about here? Just like the name suggests it, we’re talking about one’s ability to pursue talent. It is the fine blend of perseverance, personal investment, passion and hard work. GRIT don’t tire out, don’t wear or tear. They keep at it, they create, they dig deeper, and they strive for evolution, with high goals and composed expectations.

They get down to business and do the work. The house that GRIT has built is founded on tenacity as well as technique. They’ll kick doors open if resistance is met, bow with the subdued charm that characterizes them all, and remind you there’s no time, nor the will, to carry around any dead weight. The unit’s guiding principle: “onwards and upwards!”

Countless hours of studio rehearsals and live experiences have allowed them to reach the sought-after sound equilibrium: the meaty bass tones, the determined syncopated drumbeats, the volatile vocal hooks, and the two guitars’ layered sensual growls. And then, there’s the lyrics, meant to achieve the same balance, with themes broad enough to be inviting and besetting all at once. These lyrics, written like Polaroid pictures, freeze particular moments in time; a certain stage in life, A minute of doubt, the memory of a ambiguous sensation. Here, they spill the venom of anger, there, the misery of sentiments, and everywhere, the infectious need for more, right here, right now.

In addition to three very well crafted teasers, each with their own little plot and studio footage, GRIT takes it up a notch with a debut release that offers a double take on the songs. Each track has its own video, each with its own rhythm, edit, and energy, and all of it is… Live. The footage is as powerful and polished as the tracks are, and will leave you wishing you’d been in that studio, bouncing off the walls, and wondering how the band and crew managed to even contain such energy in such a confined space…

They say that playing live can either make or break a band. When it comes to GRIT, it’s a revelation, an area of controlled freedom, where unique and organic sounds meet snappy sarcastic fits of rage. Making rock music that excites the atoms without losing their focus, drive and subtlety, is bound to get GRIT some serious and lasting attention.