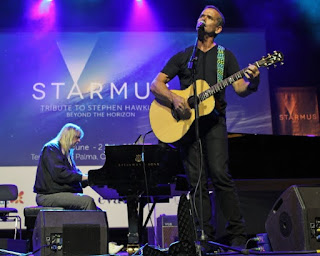 London, UK - In a rare meeting of the minds, keyboard icon Rick Wakeman and legendary astronaut paid tribute to Stephen Hawking at the Starmus Festival in Tenerife, Spain on July 1, 2016! The two legends performed a moving tribute David Bowie with their rendition of his classic song “Space Oddity”.


The Starmus Festival was born with the aim of making the most universal science and art accessible to the public. Traditionally the perfect symbiosis between astronomy, art and music, STARMUS 2016 brought together not only the brightest minds from these areas but many others besides, as we debate the future of humanity with scientists, business people at the cutting edge, and celebrities of all kinds.

Chris Austin Hadfield is a retired Canadian astronaut who was the first Canadian to walk in space. An engineer and former Royal Canadian Air Force fighter pilot, Hadfield has flown two space shuttle missions and served as commander of the International Space Station.

Commander Hadfield originally performed a cover Bowie's “Space Oddity” on board the International Space Station in 2013. He posted the video on the internet which immediately became a global sensation, being the first ever music video performed in space. Although he had made the video for a number of reasons, Hadfield felt that, “Maybe most importantly, it was a chance to let people see where we truly are in space exploration”. David Bowie himself responded saying that the cover of his 1969 song was “possibly the most poignant version of the song ever created”. The guitar Hadfield used to perform the song is still on the space station where it will remain forever!

Rick Wakeman, who played mellotron on the original version of Bowie's “Space Oddity” says, “It’s a real honour to have played on probably the two most iconic versions of 'Space Oddity', the brilliant original with David of course and now this very special version with Chris that was born 300 miles from planet earth!”

While the Starmus Festival 2016 was paying tribute to Hawking, the promoters also decided to pay tribute to David Bowie! Why? Because Bowie and Hawking share the same birthday - January 8th. Also, Bowie was very much inspired by Space, Astronomy etc… He was invited to Starmus but the invitation arrived the same day he passed…

Starmus is festival of music and astronomy on the beautiful island of Tenerife. It is the brain child Garik Israelian (The astrophysicist who led the team which found the first observational evidence that supernova explosions are responsible for the formation of stellar mass black holes). Rick Wakeman has made several appearances at this festival. The most notable was in 2014 where he was joined on stage by Dr Brian May, the iconic guitarist from Queen, where Rick Wakeman and English Rock Ensemble performed amongst other tracks from throughout Rick’s career a legendary version of Starship Trooper. This release is a must for all fans of Classic Rock!

This is a brand new orchestral piece written and performed by Rick Wakeman and the Orion Orchestra. This is a specially written piece of therapeutic music designed for people with an Autistic Spectrum Disorder to enjoy as well aficionados of good quality instrumental music. This is Rick and Orchestra at their finest !!!

Available to pre-order from www.rickwakemansmusicemporium.com