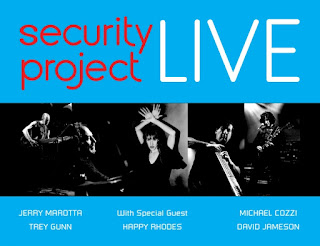 Austin, TX - When Jerry Marotta or Trey Gunn has an idea often it is a good one. But when they have the same good idea at the same time it promises to be a great one. This was the case when they turned to each other and said: “Happy Rhodes. The Security Project should do something with Happy Rhodes.”

This is exactly what is happening with the fall tour. Happy Rhodes is an American singer, songwriter, instrumentalist and electronic musician with a four-octave vocal range. She has produced 11 solo recordings. Marotta and Gunn play on a several of them.

With the addition of Happy on lead vocals, The Security Project is able to dig deeper into Gabriel’s material and take it even further (imagine Kate Bush singing Gabriel tunes with The Security Project as the instrumentalists.) Marotta says “Happy brings with her the chance to play other material we have always talked about doing. Stuff from David Sylvian, Kate Bush and other gems from Trey’s and my past work, addition to Happy’s catalog. We are excited!”

This October also sees the release of “Live 2” – the follow up to their highly acclaimed Live 1. Meticulously engineered by guitarist Michael Cozzi (mastering engineer Chris Athens calls it one of the best mixed live records he has ever worked on) the reviews have been overwhelming positive.

“The Security Project expertly reimagines Peter Gabriel’s groundbreaking early output, creating an immersive experience both in performance and on its debut release Live 1. The group goes far beyond conventional tribute band territory, infusing the songs with new arrangements and elements while staying true to the spirit of the material. Gabriel enthusiasts across the board will be taken by the band’s high-octane approach full of drive, determination and energy.” – Anil Prasad, Innerviews

“The Security Project Live is a beautifully reverential and creative reinterpretation of these Peter Gabriel classics!” – Kevin Killen, engineer of Gabriel’s “So” record

“Somehow, like Gabriel, the Security Project’s performance strikes the right esoteric balance between the tribal groove of world music and the inscrutable logic of the best progressive rock.” – Peter Lindblad, Elmore Magazine

The Security Project sees this fall tour as a move into a new phase of the band’s life. These exquisite players – with their rich history of working with King Crimson, Shriekback and Gabriel’s original band – see bringing in a female vocalist, with the musicianship of Rhodes, as a way to step even deeper into the material and expand what the band can bring to the stage.

Trey says, “I’ve known Happy for many years – her husband, percussionist Bob Muller, was my key partner in The Trey Gunn Band. I have always hoped to find the right situation where we could work together. This is it. I’m thrilled that we can now draw on a broader base of material. Jerry and I speak almost daily about pieces we could do with her. Of course, we will be hitting Gabriel’s material solidly, but with the addition of even newer fresh twists.”

The follow up to their acclaimed first CD, “Live 2”, comes out in mid-October on 7d Media in the USA, GEP Records in Europe and WowWow in Japan.

Trey Gunn
A native Texan who resides in Seattle, Gunn is known for the unusual 10-string touch guitar that he plays. From the blistering live recordings at the Royal Albert Hall in London with David Sylvian and Robert Fripp (“Damage”, Virgin Records) to ten years recording and touring with King Crimson – a group many contend as the most aggressively, adventurous rock band of all time – Gunn is associated with a constant stream of cutting edges projects. Gunn has toured and/or recorded with TOOL, John Paul Jones, Maynard J. Keenan's “Puscifer”, Vernon Reid, Azam Ali, David Hykes of the Harmonic Choir and Steven Wilson of Porcupine Tree. He currently runs his own media label (7d Media) while dividing his time between solo work; his projects TU, KTU, The Security Project, 3Below and Quodia; film/TV scoring and coaching musicians in the creative process.
www.treygunn.com
www.7dmedia.com

Michael Cozzi
Originally from Wales & London, Cozzi got his start in the mid 80's as the guitarist for the group Shriekback which had the pleasure of touring with “Simple Minds” “INXS” and “Peter Gabriel”. In the early 90's, Cozzi joined “Sky Cries Mary” with whom he co wrote 5 albums and toured extensively. During this time Cozzi opened up his recording studio “Moscozzi Studio” where he co-wrote and produced the last two SCM albums “Here and Now” and “Small Town”. He has written and produced music for bands, films, commercials, and video games, which let to him meeting and working with Trey Gunn. Two years ago Trey asked Cozzi if he knew of a guitarist for The Security Project, Cozzi put his hand up like a kid in the classroom and said “me me me”.
http://www.moscozzistudio.com/

David Jameson
Keyboardist/Eigenharpist David Jameson began his music career in the late 1970's – the heyday of powerful keyboard players. He spent several years touring with Time Machine and then left the music scene for a career at IBM after completing a PHD in Computer Science at Trinity College in Dublin, Ireland. At IBM, Jameson created and managed the Computer Music Research group and was elected to the prestigious IBM Academy of Technology. David left IBM to found Digiportal Software and Deskew Technologies that develops the acclaimed Scorecerer sheet music manager application for the iPad. He also designs MaxMSP applications and libraries for live performance and for the Eigenharp – an electronic hybrid instrument akin to a computerized bassoon that features heavily in The Security Project shows. In addition to working with The Security Project, David also performs with Beyond The Wall.

What's being said about The Security Project:

“Sound as good — at times maybe better — than even Gabriel nowadays.”– Time Out, NYC

“Peter Gabriel wrote some of the finest most profound songs of his generation. The Security Project brings them to life with an authenticity that goes beyond mimicking the original recordings. They find the emotional core.” – Glenn Hughes