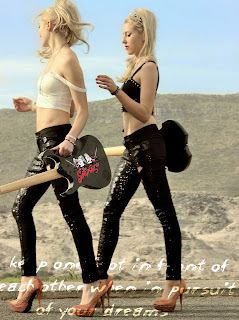 South Africa’s two most beautiful ‘musical rebels’ are releasing ‘Bad Bitch’ after a vicious attack by a venue owner whilst they were performing on stage.

The Soap Girls are …. raw, real, gutsy, innovative and thoroughly … trendsetting.  After selling soap in the streets performing as kids they are completely natural on the stage, their live sets are perfected and they definitely are the talk of the town wherever they go!

Currently the girls are touring the UK a continuation of their tour from last year promoting their raw album Calls For Rebellion and they head out to include Germany, Holland, Switzerland, Italy during the month of September/October whereafter they will return to finish off the tour in the UK till November.

Check out the UK and European Tour dates for the rest of the year –
http://thesoapgirls.com/disturbd-tour-dates/