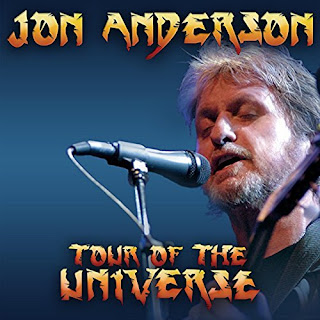 Asheville, NC – Featuring the unique song writing and vocal talent of legendary YES singer/songwriter, Jon Anderson, his 2005 debut solo concept DVD “Tour Of The Universe” is a musical passage through life, time and the world beyond, featuring many new songs as well as classic hits from his work with YES and his collaborations with Vangelis. Recorded live at XM Radio Studios, Jon's inimitable performance has been crafted with dramatic animation and innovative visuals to create this pioneering concept DVD. Now for the very first time, much to the excitement of Jon's fans worldwide, the audio soundtrack to “Tour Of The Universe” is available digitally!

“Not many people know how this concert was created...FYI, I controlled all the music/ sound effects/backing vocals through my midi guitar, using a Roland GR 30...4 small Yamaha rack mounts..with all the musical sounds and effects needed ...I controlled it all with five foot pedals fading in the sounds for each song...which was a very crazy musical 'dance' as I did the show...plus some harp ideas...with birds helping....it still sounds wild and magical to me....have fun listening...love and 'light' - Jon”

To purchase Jon Anderson's “Tour Of The Universe”: https://www.amazon.com/Tour-Universe-Jon-Anderson/dp/B01IIIGY50/

Jon Anderson was recently presented with the Prog God award at this year's Progressive Music Awards, in association with currencies.co.uk, which was held at London's Underglobe on September 1, 2016! This very special honor is awarded to musical innovators within the world of progressive rock music and sees Anderson joining such music luminaries as Rick Wakeman, Ian Anderson, Peter Gabriel and Tony Banks, in collecting the prestigious award. 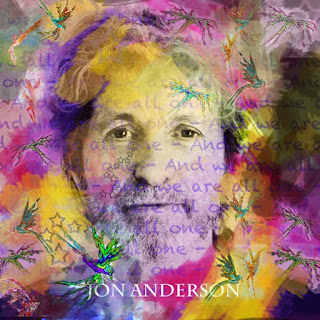 (photo by Deborah Anderson)
By Glass Onyon PR at September 19, 2016