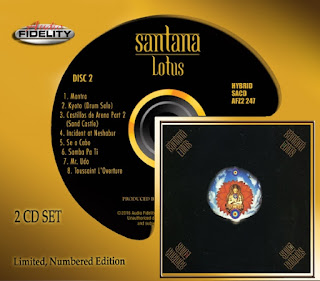 “...one of the greatest live albums ever recorded and one of the supreme achievements in guitar playing.”

Camarillo, CA – Marshall Blonstein's Audio Fidelity will be releasing Santana's critically acclaimed live album Lotus on limited edition hybrid SACD. Lotus is a 1974 live album by Santana, recorded at the Osaka Koseinenkin Hall, Osaka, Japan in 1973. It was originally released in 1974 as a triple vinyl LP in Japan only. The first U.S. release was in 1991 as a 2-CD set. It features the “New Santana Band” and combines that group's jazz and spiritual influences. Some of the band's biggest hits are performed, such as “Black Magic Woman” and “Oye Como Va,” but it is the extended, intense instrumentals that are the order of the day such as the breathtaking “Incident at Neshabur,” “Every Step of the Way,” and “Toussaint L'Overture.”

Carlos' superpowered guitar is mesmerizing, the entire atmosphere is otherworldly, beautiful, modern jazzy and most of all, electrifying. His guitar tone is perfect, each solo has a central rhythmic and melodic structure that was used to express in a moment what can never be repeated. The greatness of Lotus is its ability to take all of Carlos' beautiful melodies and expand them each into a whole new creation.

Santana fans know there are “several different Santanas.” This was the MILES Santana, the COLTRANE Santana. This is intense and awe-inspiring music played with so much mind-numbing passion. Carlos' guitar speaks notes on this recording that are nothing short of extraordinary. He manages to imbue a vibration that cuts right through your soul. Even on the familiar hits, the jazz fusion makes its way into the notes and Carlos delivers a new message. This was the top of Santana's spiritual-fusion era. Lotus is the Live Santana album that gives other Live albums a bad name. Spectacular, breathtaking, emotional, spiritual...and it rocks!