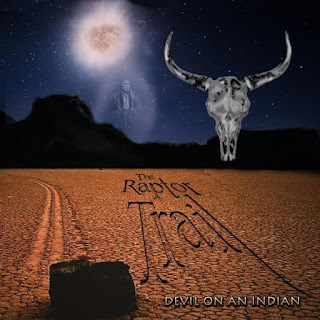 Brevard, NC – Hot on the heels of their critically acclaimed release “New World”, melodic prog trio The Raptor Trail will be releasing their third album on October 28, 2016! “Devil on an Indian” is a concept album dealing with the internal spiritual warfare that stems from a young man coming to grips with his Native American Indian heritage after being raised in 21st century white Christian morality. A near life ending motorcycle accident in the desert continues a mystical, poetic, and spiritual journey of self awareness and understanding, concluding that the heart of man is inherently evil. Set to 10 songs in three movements that seamlessly segue from one song to another, ending with the apocalyptic demise of the world.

Says guitarist Matt Mayes, “I think I have made 17 albums now in my career. They all have kind of felt like near misses. 'Devil On An Indian' is the best one yet. To get the music and lyrics to melodically and conceptually move together for an hour and 3 minutes, through ten tracks, without becoming banal twaddle or bohemic noodling was a challenge. That said, I think the result came out pretty good and I'm glad we finally made this record. It has been simmering for decades.”

The Raptor Trail has been slowly and quietly plotting its course over the last 25 years. Founding members John Meyer and Matthew Mayes had been kicking around the idea of recording something together for decades. Finally in 2014, the planets aligned and the idea actually transcended into a studio recording project which later came to be called The Raptor Trail. The Raptor Trail was actually the first song that Meyer and Mayes wrote together for the project, and it snowballed from there, with “Gravity x Ten” following, and then ten more songs over the course of the next year. The self titled first album, “The Raptor Trail,” was released in May, 2015.

Considering the musical backgrounds of Meyer and Mayes, one might not think the styles would mesh. Meyer coming from a harder edged, heavier guitar style; highlighted by the fact that he tunes his guitar in “D.” And, Mayes coming from more of a progressive bluegrass, jamrock background; highlighted by an instrument called a Guijo (Half Strat, Half Banjo, tuned in open G) But in reality, quite the opposite occurred. Not only did the styles mesh, but their melodic interplay and vast, yet different, musical influences pushed one another out of their respective comfort zones. The result was the creation of some of the most prolific, diverse, and conviction fused progressive rock music ever heard.

Before the project could be completed however, there was needed one addition. Gene Bass, long time musical companion with Meyer and Mayes, was brought on to play all drums and percussion. Gene Bass and John Meyer grew up together in Macon, GA, playing in a number of bands together starting back in 1980. Adding to this storied history is the fact that Mayes and Bass played together for 12 years in pioneer Jamrock band Jupiter Coyote which went on to sell well over half a million records. Adding yet more history to the story is the fact that Meyer and Mayes were roommates back in those days and Meyer was actually the first sound man in that band. Meyer is also the person that came up with the name Jupiter Coyote.

So the evolving path that has lead to The Raptor Trail has taken many turns and twists over the years. But, it has somehow reunited a great and long lasting friendship between three individuals who share a unique musical chemistry and history. The music has largely been recorded in each member's home studio. Then, simply passing the files back and forth over the internet and ultimately back to Meyer who has been the mastermind behind the production and mixing. The self titled album which was released in May 2015 received a warm reception from die-hard Jupiter Coyote fans, as well as many publications from the Progressive rock side of the scale.

The band released their sophomore album "New World" to critical acclaim in Spring 2016, and unlike most of the mindless, Teflon music produced today, The Raptor Trails's music is rich and layered, somewhat galactic in feel, with razor sharp musicianship and thought provoking lyrical content.

And now, much to the excitement of music fans worldwide, The Raptor Trail is releasing their new album “Devil on an Indian”!

Here's what the press have been raving about The Raptor Trail:

“Their mix of southern rock with transitory flashes of 70s prog is one classy concoction, curious and commercially minded.” - PROG magazine, UK

“The Prog genre, however, doesn’t cleanly delineate the musical environment that the band explores in this album. With influences like Rush and the Dregs, a mix of sound and melody that flirt with pop, West Coast style vocal harmonies, harmonized guitars with a Southern Rock flavor, and suspended atmospheres where Pink Floyd meets banjo rolls, the band goes beyond all duties and limitations of the Prog genre” - Axe Magazine Italy

“Imagine that the Allman Brothers Band were finally released from their alien abduction, and have returned with their minds melded with non-standard open D tunings, and wielding weapons looking like a banjo welded to a Strat'.” - Dutch Progressive Rock Page (DPRP)

“Billed as melodic prog, I can't quite escape the feeling that the only reason that tag is being used is because there isn't a neat little genre bag to drop this band into.” - Sea Of Tranquility

To purchase The Raptor Trail's “Devil on an Indian”: https://itunes.apple.com/us/artist/the-raptor-trail/id982216753
“New World”: http://www.cdbaby.com/cd/theraptortrail