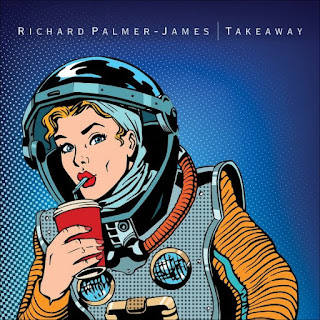 Says Richard, “Having spent the last few decades writing words for other people to sing, and thus being obliged to comply with the ambitions and sensibilities of others, I wanted to present a collection of songs that are uncompromisingly my own.

“I've been trying them out in club and pub appearances as a singer/songwriter, and they seem to work, but I'm very curious to see what sort of reaction this album production, which was realised with the indispensable help of a few talented colleagues from the Munich music scene, might elicit.

“The recordings differ stylistically from most of the stuff I worked on as a hired hand - probably because I enjoy playing acoustic instruments and writing pieces which involve storytelling.”

Richard Palmer-James got his start in the music business playing in various Bournemouth bands: The Corvettes, The Palmer-James Group (formed with Alec James), Tetrad, and Ginger Man, all of which also included John Wetton on bass and vocals. He was a founding member of Supertramp; he played guitar, sang vocals and wrote the lyrics for their self-titled debut album under the name Richard Palmer and co-wrote the lyrics of the song “Goldrush”, a song written during his days in the band and finally recorded on their 2002 album “Slow Motion”.

Richard wrote lyrics for three of King Crimson's albums: “Larks' Tongues in Aspic”, “Starless and Bible Black”, and “Red”. He did not participate in any of King Crimson's recordings, but worked with John Wetton and David Cross after Robert Fripp disbanded the group in 1974.

Richard has lived in Munich since the early 1970s. He worked in Munich on the composition and production of music for films and TV until his activities as a lyricist – for such diverse acts as King Crimson, La Bionda, Mireille Mathieu and Haddaway, among others – took priority, resulting in over 400 published titles. In the 90's, however, he returned to playing guitar regularly, and with the help of the resonator guitar and mandolin began to rediscover in blues and folk music the sources of his
musical inspiration.

In 1978 Richard was visited by John Wetton and W.J. Hutcheson, who were his bandmates in Tetrad, and they recorded as “Jack-Knife” an album with the German drummer Curt Cress in 10 days called “I Wish You Would”. He also wrote the English lyrics for the Italo Disco inventors La Bionda.

In 1997 he released a CD with former bandmate John Wetton under the title “Monkey Business”, a compilation of unreleased material including some songs that were recorded for the first time in studio, like a King Crimson tune called “Doctor Diamond”. In 2015 “I Wish You Would” and “Monkey Business” were released together as a twofer and that continues to be available via this link: http://geni.us/OVtK2P

Today Richard makes his living mainly as a lyricist and performing on guitar live. In support of his new album, Richard Palmer-James will be playing showcase concerts in the UK and Germany.