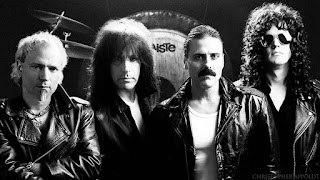 
Tribute bands have become commonplace in the world of music. Some are fantastic representations of the original bands and others get by somehow. Last night at the Colonial Theater was an example of a group of musicians honing their skills and presentation to make you believe it was Queen performing. They are not just a cover band as the DJ from Live 95.9 told the crowd, they bring you the Queen Experience!

Almost Queen certainly sounded more than almost. This was a truly amazing performance by these talented individuals. The lineup is as follows: Joseph Russo as Freddie Mercury, Steve Leonard as Brian May, Randy Gregg as John Deacon and John Cappadona as Roger Taylor. It is uncanny how Russo is a dead ringer for Freddie and sounds just like him. What are the chances of that happening? Well believe it, this is the stuff that fairy tales and dreams are made of. Russo was a good study of Mr. Mercury down to his mannerisms and moves on the stage, not to mention his refined accent and humorous comments.

I saw Queen in 1976-77 and ironically Russo told the audience the same thing. So, for this music fan the bar was set as high as it could possibly be. They not only met that expectation, they exceeded it. The musicianship was excellent and the lead vocals and harmonies were spot on. I could not have asked for more as far as representing the legend of this great band properly. They did it all with a class and flare that Freddie would have loved. In my opinion Freddie Mercury (lead singer 1970-1991) was the greatest rock singer to ever grace a stage. It is unfortunate we lost him at such a young age.

The crowd was at capacity and it was one of the most energetic and joyful groups of people I have had the pleasure to be amongst. I am sure the band was thrilled with the response they got all night long. And what was most satisfying was that everyone knew the words to the songs we were asked to participate in. It was magical and it made my heart smile.

The concert once again validated the legacy and the importance of Queen since their inception in 1970, which by the way was an incredibly exciting decade for music. Some of the highlights of the evening where “Tie Your Mother Down,” the second song into the set. That is real rocker and set the tone and energy level for the night. As they made their way through their set, they covered many of the hits and familiar tunes. If you were a Queen fan you were there last night. I think most of audience that either remembers the band and the younger generation that discovered them were present. It was an exhilarating experience to be a part of.

The encore? You guessed it, the incredible progressive work of art titled “Bohemian Rhapsody” their signature song. It was the pinnacle of the evening no doubt.

For those interested in the Queen catalog, the releases that are high on my list are Queen 1 & 2, Sheer Heart Attack, Night At The Opera and Day At The Races (which were two classic Marx Brothers comedies). I also highly recommend purchasing the complete box sets of Queen and most of all, attending a live performance of Almost Queen.

I attend as many concerts as humanly possible at the beautiful venue and always feel grateful and honored to do so. A big shout out thanks to Rebecca Rebecca Brighenti of Public Relations and the in-house sound wizard at the board Darren O’Brien who always does a superb job.

Set List:
We Will Rock You
Tie Your Mother Down
Play The Game
Bicycle Race
I Want To Break Free
Radio Ga Ga
I Want It All
Killer Queen
I'm In Love With My Car
You're My Best Friend
Dragon Attack
Another Bites The Dust
Fat Bottomed Girls
Don't Stop Me Now
Somebody To Love
Crazy Little Thing Called Love
Under Pressure
Encore:
Bohemian Rhapsody
We Will Rock
We Are The Champions