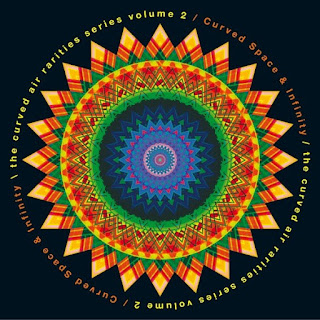 London, UK - “Curved Space & Infinity”, the second volume of the CURVED AIR RARITIES SERIES, is now available! These TWO separate albums, packaged together are a must for fans of the legendary Prog band and instrumental improvisational music!

This instrumental double CD set is the only Curved Air release not to feature lead singer Sonja Kristina, but has been released with her full support and blessing.

Francis Monkman commented “I'm pleased that the ‘Jam CD’ has been transmuted into a Curved Space release. An entirely collaborative effort, I was never keen for it to be released in the guise of a solo album, but there seemed to be no viable alternative at the time. Listening to it now, it seems to me to sound as fresh as ever - indeed it was an ideal for some bands in the 1960's to come as close as possible to jamming all the time, precisely because the process of raw discovery holds elements that simply cannot be reproduced when material has been subjected to rehearsal (usually after dissection into some kind of song format).”

Robert Norton said of Infinity “At times we found it hard to believe these compositions were created entirely in the moment and were genuinely surprised and inspired by what emerged from them. The name Infinity encapsulates the spirit of freedom with which the three of us approached the making of this album and the limitless possibilities of creating music in the moment.”