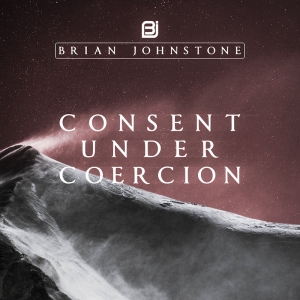 Brian Johnstone has a body of work behind him but this release is a solo effort. Consent Under Construction is 10 tracks with tracks 6-10 consisting of two part opuses.
Johnstone has created his own path with this recording. This is a true solo effort with no frills and some good progressive rock.
I love the album’s title. It’s always a good thing to have Consent Under Coercion. One listen is enough to convince you to turn it up and listen closely.

“Ujezd Tarantella (Taste The Fear)” is one of the best tracks. Johnstone uses all his weapons to have one of his finest moments. The track is like a soundtrack to a movie (like a classic thriller such as Psycho or The Birds). It’s sensationally terrifying with mood swings and music to match. Great guitar lines and mind melting keyboards lead the way as the artist sings, feels and lives the part. You can hear the sincerity in his voice as the music echoes his sentiments. This is musical theater at its very best.

“The Course of Empire: Children of the Stars” kicks off the suite of tracks that tells a story. It is like opening a book and you start reading and can’t’ put it down. It is an upbeat and powerful way to start the second half of the album. As the door swings open you gladly walk through trusting the music will take you down the right road. The story continues as the placement of guitars and keyboards are just right ushering in the empire and its offspring.

Brian Johnstone is quite a talent. Perhaps it’s time to consider making this a book or screenplay with this album as the soundtrack with a full-blown orchestra as an add on? Then it would be Wakeman like! Of course, it’s nice to dream and ponder the possibilities, isn’t it? In any case this music can stand on its own as a singular project that showcases one clever artist and his abilities to create a storyline with some great music to entertain you as it all develops.

Key Tracks: Ujezd Tarantella (Taste The Fear), The Course of Empire: Children of the Stars