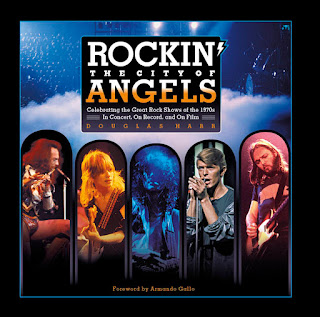 London - Concert culture in Los Angeles, the City of Angels, in the 1970s had all the lush opulence of theater, the virtuosic chops of a classical performance, and the edge-of-your-seat excitement of rock n’ roll. First-time author, and lifelong music fanatic, Douglas Harr’s Rockin’ The City Of Angels: Celebrating the Great Rock Shows of the 1970s In Concert, On Record and On Film brings to life all the classic majesty in real time. This collection of over 500 stunning images is carefully culled from the premiere practitioners of fine art photography, covering a refreshingly broad cross section of 1970s iconic artists.

“The 1970s were a time when rock bands made expansive concept records with sweeping themes,” recalls author Douglas Harr. “Rock albums back then promised ‘theater of the mind,’ and their creators were inspired to mount elaborate stage shows that brought these dreams to life. I caught many of these concerts in Los Angeles. They were almost religion to me and masses of fellow concert-goers.”

RTCOA celebrates more than thirty incredible performances, including key tours by bands such as Led Zeppelin, Queen, David Bowie, Fleetwood Mac, Genesis, Heart, Jethro Tull, Pink Floyd, The Who and Yes. These myth-making moments are presented here by a hand-picked collection of brilliant images by the best photojournalists of that time, including Richard E. Aaron, Jorgen Angel, Fin Costello, Armando Gallo, Neal Preston, Jim Summaria, Lisa Tanner and Neil Zlowzower among many others. “I spent 2 years in basements, agencies, and sometimes bands' homes, combing through hundreds of slides to find the best concert photos from that time, now so long ago,” Harr shares. In addition, RTCOA includes written commentary reflecting on these legendary concerts with reviews of the best concert video documents filmed during the era.

This 396-page book is thoughtfully divided into three sections. “Rock Gods & Entertainers” features bands like The Who, Stones, Zep, Tull, Bowie, Queen, and AC/DC. “Shamans, Storytellers, and Mellow Rockers” explores the concerts of Genesis, Yes, Cat Stevens, Eagles, Heart, Supertramp, Kansas, and more. Lastly, “Virtuosos & Classic Rockers” brings to life performances by ELP, King Crimson, ELO, Dixie Dregs, Kate Bush and many of their peers. This is the perfect gift for those who were there—or wish they were there—for that magical time.

Harr is a staff writer for Gonzo Weekly magazine, part of the Gonzo Multimedia label in England. In addition, he has contributed articles and photographs to Expose Magazine and Something Else Reviews in the U.S. His writings and photos are also captured in his weekly blog at diegospadeproductions.com. He is an aficionado of progressive and classic rock music from the early 1970’s and a frequent concert patron who has attended more than 400 shows during his lifetime. He was classically trained on the piano for seven years before transitioning to college and full-time “music patron” status. Besides music publications, Harr’s written work is also featured in technology books, including CIO Perspectives and Data Insights: New Ways to Visualize and Make Sense of Data, and in his blog on music and technology Alternative IT. All this has been a part of a 30-plus year career as a technology executive and patron of the rock ‘n’ roll arts.

This coffee-table book is nearly the size of an LP album cover, 396 pages, over 500 images, written by Douglas Harr, designed by Tilman Reitzle. Foreword by Armando Gallo.

Customers pre-ordering before December 20 will receive a signed commemorative postcard which can be used as a gift, just in time for the season.