Concert Review: Let It Be A Beatles Tribute

Let It Be at The Proctor in Schenectady New York
February 18, 2017 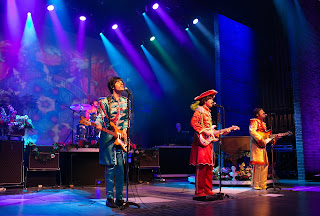 The Beatles music is timeless and over the years they have been celebrated again and again and so has each individual member of the band for their excellent solo work. There is still a huge market for their music and anything to do with the ultra-famous Fab Four. Only two other artist rank at the top of list for worldwide album sales, Elvis and Michael Jackson.

There have been many knock offs of The Beatles over the years however how many could you count as being legitimate imitations of them?  I experienced a band last night that were a close facsimile to them.

Let It Be is an entire production company devoted to bringing The Beatles music and stage show to an audience that never had an opportunity to witness the original band in a live setting. 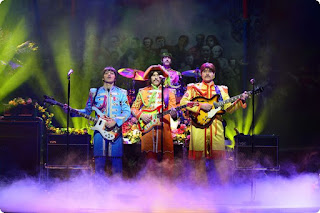 I was only 12 years old when The Beatles broke up and launched their solo careers however I did grow up listening to their music. I remember clearly as a little boy watching them on the Ed Sullivan show when they arrived in the US (or the colonies as they said last night). I can hear the girls screaming now muffling out the mop tops music and not understanding what all the fuss was about, I just wanted to hear them playing.

As the years went by I never lost my love for their music, it is something all the fans hold close to their hearts regardless of age. I saw all ages at the concert and the Proctor was packed full. It was nice to see that and what we were about to witness was fascinating.

The gents that played John and Paul, Gagliano and Candelora, had their vocals down spot on. Gagliano looked more and more like John as the night went on. It was giving me chills, especially when he sang. At first when I looked at the drummer, McBurney, I did not see much of a resemblance with Ringo but when he came out at the second half of the show with a beard he looked like a dead ringer for Mr. Starr.

The first half of the show were some of the early hits and how they transformed into what we would see at their performance in Shea Stadium and during Sgt. Pepper’s (complete with the colorful garb) and then what they looked like towards the end of their careers just before they broke up.

The second half of the show was very interesting as well. They presented The Beatles and what they would have been like if they reformed after years of their solo work had been produced.

They mixed it up well and the stage presentation was top notch. I would not hesitate to say, being a lifelong Beatles fan, that this representation of the band was excellent with a very entertaining and colorful stage show to match.

The musicianship was great and the vocals as close to the originals as anyone could expect. I highly recommend seeing Let It Be if you have the opportunity.