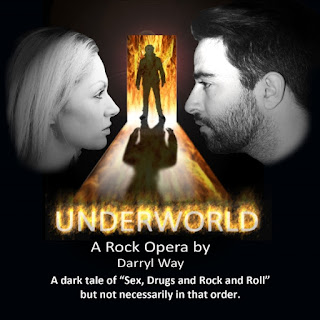 Says Darryl, “Having touched on Greek mythology in my last album, 'Myths, Legends and Tales' I became fascinated with the idea of writing a major work based on one of these myths. Originally I was going to set Shelley's epic poem 'Prometheus Unbound' to music, but on further investigation it became clear that it was a little too 'epic' and too big a mouthful to bite off. Then the thought struck me of updating or re-imagining the myth of Orpheus and Eurydice and setting it in a period and environment that I was totally familiar with - the world of rock music and the 1970s. However, I felt a little uncomfortable with the idea of writing a musical, but then it occurred to me that it could be a rock opera, because it is 'song and drama' as opposed to 'song and dance' and with the addition of a narrator, it could be both a concept album as well as a theatrical production. So in my Underworld, Orpheus is now a rock megastar and Persephone, the queen of the underworld, a nightclub owner and drug dealer. The Asp that Eurydice falls victim to on her wedding day, is replaced by an equally fatal drug addiction. Glibly it could be described as a tale of 'Sex Drugs and Rock and Roll', but in essence it is a dark and powerful tale of 'Love, Betrayal and Revenge'. Underworld starts off gently with songs of love and longing but as the plot develops, the music darkens as we descend further and further into the murky realms, of the 'Underworld'.”
.
Originally formed in 1969, Curved Air was a groundbreaking progressive art-rock band renowned for their showmanship. Darryl Way was noted for his flamboyant virtuoso exploration of the electric violin. He wrote the music for the Top 10 hit (reached #4) “Back Street Luv” and was a major contributor to the 3 albums that made the Top 20. With Curved Air he toured extensively, performing in practically every major city in both America and Europe. Before becoming headliners themselves, Curved Air toured with Black Sabbath in the UK  and in the USA they toured with Deep Purple, Jethro Tull and Emerson, Lake & Palmer. They also appeared on the same bill as The Doors, Steppenwolf, B.B. King, Johnny Winter and Dr. John.

After Curved Air Darryl went on to release several critically acclaimed solo albums in both 'rock' and 'classical' genres. Among these, was his 'Concerto For Electric Violin', which was premiered on the South Bank Show with the Royal Philharmonic Orchestra and himself as soloist. He also performed  this concerto live on German television with the Bravarian Radio Symphony Orchestra and in England with the Northern Sinfonia. Darryl's collaborations include working with Sir Tim Rice, Sting and Gary Brooker (Procol Harum). In classical genres he has orchestrated Stewart Copeland's ballet “King Lear” for the San Francisco Ballet, and Stewart's opera “The Holy Blood and Crescent Moon”, premiered by the Cleveland Opera in the US. In 1996, Darryl's own opera “The Master and Margarita” was premiered at The Place Theatre in London. Alongside these projects, Darryl has also worked as a film and television composer.

As a violinist, Darryl has lead the London-based Electric Symphony Orchestra for concerts at the Royal Festival Hall, and lead and recorded with The Elektra Ensemble, performing classical and contemporary music. As a session musician, he has recorded with Jethro Tull, Sky and Marrianne Faithful. He has also played with the National Philharmonic Orchestra on film scores such as “Die Hard”, “Licensed To Kill” and “Baron Munchausen”. Recent work includes being musical director for the soprano Emma Shapplin, for a series of televised UNHCR concerts at the Parthenon in Athens.  Recent compositions include a Symphonic Choral work entitled “Siren's Rock”, premiered at the Plymouth Guildhall with the South West Sinfonietta, Opera South West, Naomi Harvey (WNO) soprano and Stephen Crook, tenor. During his illustrious career, Darryl Way has created and been a major part of over 20 commercially released albums. His most recent releases “Ultra Violins,” “Children of the Cosmos” and “Myths, Legends and Tales” have all garnered rave reviews worldwide! And now, he will be releasing his highly anticipated new album “Underworld”!

To check out the whole rock opera, complete with dialogue and narration, go to: https://geo.itunes.apple.com/us/album/underworld-rock-opera-complete/id1232440489?mt=1&app=itunes
To check out the songs only, go to: https://geo.itunes.apple.com/us/album/underworld-rock-opera-the-songs/id1236224422?mt=1&app=itunes