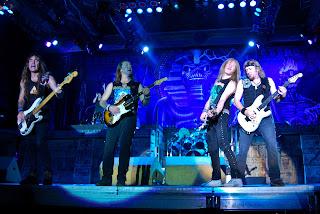 I can tick one off the bucket list now. I finally got my opportunity to see the iconic metal legends Iron Maiden in concert. I have been waiting for many years for this night and it was worth the wait. On a steamy July night, an over capacity crowd at the Xfinity Center in Mansfield, Massachusetts reveled in their time witnessing the heavy metal giants perform.

I have never seen that many people in sync like that, the admiration and respect was evident all night long. You would expect a raucous crowd, and I know we are all stereotyped like other groups of people, but this was an orderly crowd and when we all left there were no issues. So much for the stereotypes, you can throw them right out the window. We love our metal and our bands, and as Bruce Dickinson said, prior to a short dissertation of the world before a song, we are all “Blood Brothers.” One people enjoying each other’s company and the music.

The opening band Ghost is one I was anticipating as well. I had already purchased all their music and found their presentation onstage very theatrical. Of course, Maiden takes that element to entirely different level when they get on the stage. The music of Ghost is heavy and precise. The band’s lead singer “Papa Emeritus III” has put together a well-oiled machine, and he looks menacing as hell (no pun intended there). The “Nameless Ghouls,” the rest of the band, all have their devil masks on while the lead singer is a moving skeleton working the stage all night. The act is a tribute to the dark side and Satan. It is entertainment, an act yes, and I do not believe for a second they are worshipers of Lucifer. When you talk about being happy and prosperous as the lead singer did last night, well, worshipers of the dark master just don’t discuss such things, so there you go. The music is as awesome as I expected in a live setting. I would expect this band to continue to grow a large following and eventually be headliners.

Ghost was a superb warm up band for Maiden and I think everyone in attendance really enjoyed their music and presentation.

Iron Maiden’s stage sets the tone for their shows. With mascot Eddie and the backdrops for whatever album they are touring under, it always makes it a total multimedia event. This was the next to the last show for the incredible masterpiece The Book of Souls.

All the members look to be in terrific shape physically and Bruce is still running around the stage all night long. He was totally soaked in sweat after only a few songs (as was I all night long). The energy he commands onstage is something to behold. The band has been together so long it is like watching a family joining together to celebrate what they love. You can feel the honesty in their performance. With three excellent guitarists and the phenomenal founder and bass player Steve Harris uniting them to make their way through fan favorites and the most recent recording, it really was something people in attendance will never forget.

The large video screens were amazing. The shots of the band on stage were HD quality, you could see the sweat on their arms and watch their fingers blazing away on the guitars. It made a difference for all of us in the upper sections. It was hard not to keep looking at the screen!

The one thing I did notice that was a blemish on an otherwise excellent show, was how Bruce’s mic kept cutting out last night. It happened frequently, so hopefully that is something that would be corrected by the venue or their own team on the mixing board. I am not sure where the problem was originating from.

The venue is in an off the beaten path area and by the time we made it through the incoming traffic, the only parking left was the very last lot with a 2 hour wait to get out. I learned my lesson when attending such a major event there. You should either get there when they open the lots or pay the price to park outside the venue! Fair warning to those who have not been there yet.

The inconveniences were not welcomed but dealt with in good spirits by all in attendance. And why not? We got to see phenomenal heavy metal in one evening so it was worth it. I had always watched the DVD sets over the years of Maiden and now understand the energy level and commitment of the band and their fans.

Iron Maiden Set List:
Doctor Doctor
(UFO song)
If Eternity Should Fail
Speed of Light
Wrathchild
Children of the Damned
Death or Glory
The Red and the Black
The Trooper
Powerslave
The Great Unknown
The Book of Souls
Fear of the Dark
Iron Maiden
Encore:
The Number of the Beast
Blood Brothers
Wasted Years
By Keith "MuzikMan" Hannaleck at July 21, 2017