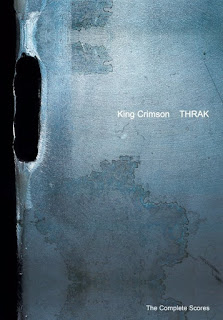 Transcriptions by Gabriel Riccio
Editing and tabs by Trey Gunn 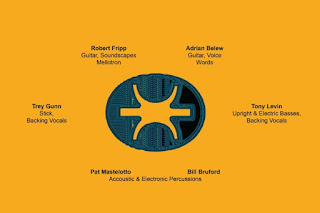 A book of King Crimson transcriptions is a built-in contradiction – Crimson rarely steps in the same puddle twice.

This is a band known for stretching beyond even its own limits, meaning most of the arrangements are given freedom to grow and change as the spirit moves. My own experience in the group was that about every one to two weeks some part of the compositions had significantly morphed into something else. For example, in the VROOOM coda, the Sex Sleep Eat Drink Dream “Spider Fingers Freakout” and THRAK every night saw the musicians heading into unexplored territory. As a result, any book of transcriptions can only reflect a slice in time of what this particular Crimson was doing on this particular day during this particular performance.

The approach Gabriel Riccio and I have taken with these THRAK recordings was to adhere strictly to what is on this record. While we’ve referred to the 2015 re-mixes and various live versions of the pieces, we have generally stayed with notating what is in the 1995 original mixes and performances.

These particular recordings, made at Peter Gabriel’s Real World Studios in the UK, were live performances. In my memory, we played each piece as a group once or twice through, picked a take and then quickly added overdubs accordingly. In most cases the overdubbing was very minimal. The record was largely completed in two weeks time, including all of the vocals. 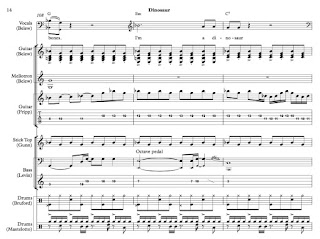 Gabriel Riccio on some of the challenges of this score book:

THRAK has been one of the most challenging records to transcribe thanks to the dense 6-player arrangements. This often made it difficult to tell who is producing each sound. The title track is perhaps the most exciting piece to see on paper, as many of the band's greatest tricks are on display – hocketed polymeters, symmetrical scales, and fiery improvisation.

The hardest part was figuring out how to write down the electronic drum parts. Bill Bruford provided some valuable input on that front, breaking down his sounds into four main categories which I used as labels throughout. The drums in the 'Sex Sleep Eat Drink Dream' freakout are a great example of the complexity of this music - Bruford plays sextuplets phrased in 5s against Mastelotto's 4/4 groove.