Concert Review: The Airplane Family and Friends With Live Dead '69 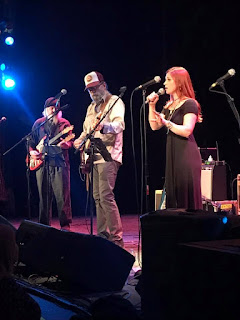 If you are an individual that appreciates nostalgia and great music then you would have loved the show presented last night at the Colonial Theater in Pittsfield, MA.

I have always loved looking at the past and certainly reflecting upon it when I hear music from the 60’s. It is all about the music my older brother and sister used to be playing on the record players (yes records, they are back in a big way now) and listening to the hits on AM Radio.

I had one thing in mind for the concert I was about to witness, I thought it was one band. The Airplane Family & Friends with Live Dead ’69 is three shows!

This is the third version of the band from what I have gleaned and it is comprised of the following musicians: Tom Constanten (keyboards), Slick Aguilar (guitar, vocals), Mark Karan (guitar, vocals), Mike Falzarano (guitar vocals), Robin Sylvester (bass), Johnny Markowski (drums) then Robyn Cage and Joli Valenti singing the parts of Grace Slick and Marty Balin respectively.

The night consisted of each musician taking the lead and or singing then leaving and entering again. No warm up band was needed as they played a solid 2.5 hours with a short break in the middle. And a lot of the time they just went from one jam right into another. Sometimes you would hear some familiar riffs tucked in between the jams, like things from Bowie or Jeff Beck for instance. It was instantly recognizable for this listener that is for sure. 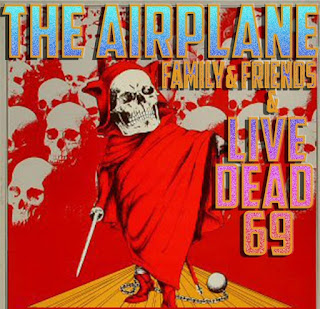 So first up was music of The New Riders of the Purple Sage. Their country infused blues rock boogie was superb. And the one song I remember the most was “Panama Red.” And just so you know, they did play it! Then after that was finished we got a good dose of The Grateful Dead. This was the most interesting and enjoyable part of the presentation. Although I felt the entire evening was outstanding, this was something special. The Dead’s songs are complex and ever changing, built for long jams and improvisation. And to top it off there were some folks dressed in Woodstock era clothing and many were dancing, twirling and doing Tai Chi like movements. That was the sideshow but the serious entertainment was on stage.

Then we had a short break and The Airplane group came out, with a few different faces. Robyn Cage came out to the stage not looking anything like Grace Slick but man did she belt out a song like Grace. She had it down perfect. Joli Valenti was introduced as well.

There was so much to enjoy in this evening, I found it hard to organize all the thoughts running through my head. So, what we all enjoyed was a triple bill of timeless music that was presented with professionalism and class. The musicianship was beyond compare. For those of you that love this music and missed this show, I feel for you because it was just about as close to the real deal as it gets.

Review Provided By Write A Music Review
By Keith "MuzikMan" Hannaleck at October 29, 2017