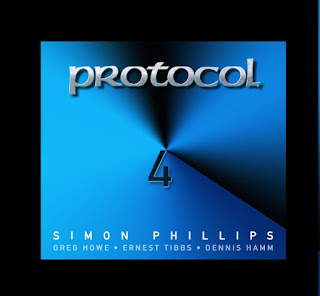 Drum legend & producer extraordinaire Simon Phillips will be releasing “Protocol 4” on October 27th on Phantom Recordings, distributed by AMPED™. Simon Phillips is by far one of the world's most renowned and respected drummers, whose style not only reflects his technical gift but also his distinct musical sensibility. Whether it is Rock, Fusion, Jazz or World, Simon applies the same precision and intensity to his drumming, which is never lacking in emotion and feel.

Simon has upped the ante with his newest instrumental recording “Protocol 4.” Building on his past Protocol projects, Simon has again enlisted the highly talented bassist Ernest Tibbs along with Protocol newcomers, the superb veteran guitar shredder Greg Howe and keyboard virtuoso Dennis Hamm. All compositions were written by Simon while on tour.

“The first time I've really been able to concentrate on writing material on the road. Lots of creativity on airplanes and in hotel and backstage dressing rooms,” says Phillips. Perhaps the vibe and energy of touring accounts for the slightly more “metallic edge” to this new album. But, as is always the case, Simon's music defies specific labels as he fuses elements of rock, jazz, funk, classical and even world music into the mix. A case in point being the track “Celtic Run” combining a Celtic rhythmic motif with blazing guitar and synthesizer leads all held together with Phillips signature ultra-tight drumming and Tibbs ever solid bass work. “Passage to Agra” is a rhythmic musical excursion to an exotic foreign land. The tracks “Pentangle” and “Solitaire” both contain some super funky grooves underlying jaw dropping metallic jazz/rock soloing. Greg Howe's guitar work shines throughout the recording, perhaps no more so than the plaintive and anthem-like track “Phantom Voyage.” Dennis Hamm's keyboard work is stunning on each and every track, whether he's soloing or adding lush orchestration. The album concludes with the monster high energy fusion track “Azorez.”

In addition to awesome musicianship, Simon's impeccable production and recording technique shine once more on this album. “Protocol 4” is certain to please longstanding Simon Phillips aficionados and is certain to also bring new Protocol fans into the fold. 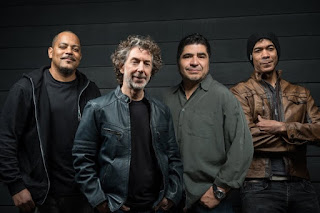 Simon Phillips (Drums) - To date Simon Phillips has toured and recorded with many bands and artists, including: Mick Jagger, The Who, Jeff Beck, Jack Bruce, Peter Gabriel, Joe Satriani, Tears for Fears, Judas Priest, Roxy Music, Michael Schenker, Nik Kershaw, Al DiMeola, 801, Pete Townshend, Robert Palmer, Mike Oldfield, Stanley Clarke, The Pretenders, Whitesnake and Dave Gilmore... to name but a few. Expanding his career from drumming to composing, Simon recorded his first solo album “Protocol” in 1988, followed by a live album, “Force Majeure,” in 1992. During that year he joined Toto on their Kingdom Of Desire tour of the World, the start of a 21 year collaboration. He recorded his third solo album, “Symbiosis,” in 1995 and “Another Lifetime” in 1997. “Out of the Blue,” a live album, followed in 1998 and in 1999 he released “Vantage Point,” which is a pure, straight ahead jazz album in collaboration with pianist Jeff Babko. Yet another expansion to Simon's musical career is producing and engineering, which he first started back in England with British composer Mike Oldfield, working on three albums with him. Aside from his solo projects, Simon also co-produced several albums by Toto. In 2009 he formed PSP with Philippe Saisse and Pino Palladino. A live CD and an EP was produced and tours of Europe and Japan in 2011 & 2012.  In 2010 he joined Michael Schenker for a short tour of Japan and performed with Trilok Gurtu and the NDR Big Band for an amazing project resulting in the “21 Spices” CD. That year Simon was approached by Japanese virtuoso pianist Hiromi to form “The Trio Project” together with bass legend Anthony Jackson. The trio has recorded four CDs: “Voice,” “Move,” “Alive” and “Spark” and has been touring throughout the World the past 6 years. 25 years after his first solo recording, Simon released “Protocol II” featuring Andy Timmons (Guitar), Steve Weingart (Keys) and Ernest Tibbs (Bass). The band, under the name of “Protocol II,” toured in Europe, the US and Japan. At the beginning of 2014 “Protocol III” was recorded and tours of Europe, Japan and the US followed. And now much to the excitement of Simon Phillips fans worldwide, the new CD, “Protocol 4,” will be released on October 27th!