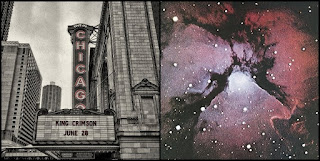 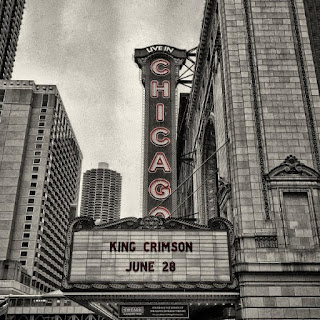 The album showcases many iconic King Crimson pieces performed live by this line-up for the first time – some being played live for the first time ever, including: “Islands,” “The Lizard Suite,” “The Errors,” “Fallen Angel,” “Cirkus” & more..

“If we are looking for a KC live (show); Chicago was exceptional” – Robert Fripp

“One of our best” – Tony Levin

Reasons for the CD release:

1) Musicians know when a gig has really worked; when all the practicing, rehearsing, playing, set-list comes together in a particular time & venue with a particular audience. So, when musicians unanimously say that a concert was special, it's time to pay attention & plan a release for the broader community of fans as soon as is possible

2) King Crimson is a band that's best experienced live & if you can’t be there, the live album is the next best thing. Those fortunate to have recently witnessed the band live will surely want to also own this new live release. 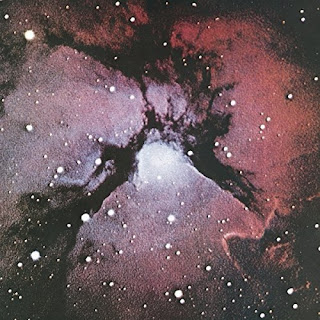 With much of the material from “In The Wake Of Poseidon,” “Lizard” and “Islan ds” now being performed by the current King Crimson line-up (2014 - to present), it is only in recent years that the wider world has begun to realise what fans have always known: this era's recordings are as vital as any other segment of the King Crimson catalogue.

Recorded between the dazzling impact of “In The Court Of The Crimson” in 1969 and the startling reinvention of the band in 1973's “Larks' Tongues In Aspic,” this boxed set documents a crucial period in King Crimson's history and shows it to be brimming with innovation, experimentation, and boundary-pushing energy.

With a wealth of previously unheard studio recordings from band rehearsals to full alternate mixes and a vast array of live material, much of it on CD/Blu-Ray for the first time and including four recently found, never before released concerts, this set presents the complete King Crimson recorded history of the period in the best quality audio possible.

King Crimson's “Official Bootleg: Live in Chicago, June 28th, 2017” and “King Crimson - Sailors' Tales (1970 – 1972)” - Limited Edition 27 Disc Boxed Set can be pre-ordered via the shops at www.schizoidshop.com as well as available through traditional retail outlets. The US based Schizoid Shop has recently added a range of new shirts and other band-related merchandise, and offers weekly specials including offers to win free tour tees.

As well as standard tickets, the band's label, DGM, also has announced sale of VIP Royal Packages, limited to just 60 per show. Details can be viewed at the label's interactive and recently redeveloped website, www.dgmlive.com.