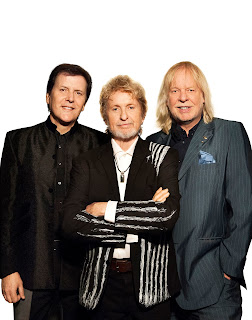 Around this time 15 years ago I saw Yes perform in Albany. Then it was the classic lineup. How things change with the passing of time. Since then a lot has happened for the men involved with the legacy of this legendary band. Most significantly, Chris Squire, one the band’s founding members, passed away. The other musicians have remained active.

I sat in some excellent seats in the left orchestra section. The seats were so generously provided by Jamie Carroll of Press Here Publicity.  The Palace is one of my favorite places to go to a concert, it is beautiful and easily accessible from where I reside. I am very grateful for the opportunity to provide coverage.

Yes, is the godfather of Prog Rock as far as this music listener is concerned.

Oddly enough my favorite recording is 90125 which was their most commercial release and their biggest seller. Well, I was in for a treat because a few of those songs were played. I think because Trevor (who recorded 4 studio with Yes) was in the band for that album, it made sense to dive into those tracks. And speaking of godfather’s, Rick Wakeman is and always will be THE ultimate prog rock keyboard master. Everyone else came after him and was influenced in some way by the man.

I was amazed by how fantastic the band sounded, they exceeded my expectations, which were very high prior to entering the venue. Jon Anderson sounded great, as good as ever.  For a gent that is 72 years old he is truly an iconic and inspiring individual. His energy is so positive and he simply owns the audience.

“Cinema” kicked off the evening. This was a great choice to get the crowd into it right from the start. There was no problem with that. The place was packed, which came as no surprise to me. Mr. Rabin is a superb guitar player with a great vocal range as well. His vocals certainly compliment Jon’s and when he takes the helm it sounds powerful and commanding. Of course, Mr. Anderson has one of the most identifiable and unique vocal styles in the world and you immediately recognize no matter where the music of Yes is playing. This is a trademark style so impactful that it is hard to ignore

“Heart of the Sunrise” is a prog rock classic we are all familiar with and it just has to be a part of their set. It was not only done well, it was presented with perfection. Each member clicked as if they have been touring together forever. And I cannot forget to mention how the gents in the back of the stars, Lee Pomeroy (bass) and Louis Molino III (drums), were the quintessential rhythm section that held it all together. They deserve a lot of credit.

I realize their set list does not seem that extensive however we must remember this is prog and each song is musical workout that carries on a good 15 minutes or more with plenty of improvisation. That is the beauty of progressive rock and what I always found so intriguing.

The classic everyone knows, “Roundabout,” was the obvious encore and they did not disappoint. It was a bit shorter than I expected however, that is not a complaint just an observation. We certainly got a good dose of Yes music for the evening and everyone enjoyed the show.

Yes is timeless and legendary with a deep catalog that could keep them touring until they were all 90 years old. Although that is not realistic we all should continue to support them while they are still recording and touring. I will be there, you can count on that!

Set List:
Cinema
Perpetual Change
Hold On
South Side of the Sky
And You and I
Changes
Rhythm of Love
I Am Waiting
Heart of the Sunrise
Awaken
Owner of a Lonely Heart