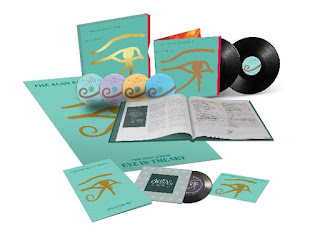 I think it is appropriate to kick off this review of the Alan Parson’s Project Eye In The Sky 35th Anniversary Box Set with an explanation of what encompasses this great tribute to this progressive rock classic.

Disc 4: 5.1 Surround Sound and Stereo HD version of the original album on Blu-ray.

Also included are 2 vinyl LPs of the original album recorded at half speed on four sides at 45rpm at Abbey Road Studios by Miles Showell, a flexi-disc replica of an original 1982 promo (remember getting those in magazines long ago?), a 60-page hardcover book featuring newly-written essays, previously unreleased images recently discovered in Eric Woolfson’s personal archive and new interviews with many of the musicians who recorded the tracks on the album, an Eye in the Sky 1982 replica poster and postcard, a gold-foil Eye of Horus stamp on the front of the box and more.

Most people that walk this earth have heard” Sirius” one time or another. It was dubbed as the Michael Jordan era Chicago Bulls theme song and then started to find its way into many other sporting events all over the world. In fact, I just heard it recently on a commercial.  It is a superb instrumental curtain opener that melts into the lead off album track. The aesthetics are superb and the first thing that strikes you as “quality” is the gold stamped Eye of Horus on the outer sleeve of the box.

Eye In The Sky was first released in 1982 and I remember it well. I had the cassette then eventually got the CD and now I possess the grandest version of them all. One thing to keep in mind, for the uninitiated, is that the Alan Parsons Project was very successful several years before this amazing album was released. It was part of the recordings that ushered in the digital revolution of recordings. At the time, that was a new wonder and now it’s just history. I think it is taken for granted by most of us, well those that can remember that far back or were even alive for that matter. Technology moves so fast today you don’t have time to really appreciate it before it is updated or completely changed.

There is so much to enjoy in this lavish box set. So, I had to break it down section by section to get the full-on effect of such a complex recording with all the new materials, pictures, artist notes, track developments and the several formats offered. The first thing that got my attention and great interest was the bonus track disc. What made it so interesting was how I could hear the beginnings of tracks. For instance, one track was with just acoustic guitar or Eric Woolfson humming. Although just a snippet it was a rare look into the very beginnings of a track. I got a few tastes of what it is like for an artist that starts from scratch with an album. I worked with a few folks, taking basic bare bones ideas and then gradually adding some meat.  It was an eye-opening experience, adding the instruments to get to the point where it stands as one solid piece of work. To be involved in that process is quite amazing and it gives you an appreciation and respect for the recording process that you never had. So, to take in the process of a musical genius like Alan Parsons and his main partner Eric Woolfson (who passed in 2009), really was quite a complete musical experience. CD2 Eric Woolfson’s Songwriting Diaries (Previously Unreleased) really gives a window into the beginnings of a song and Eric’s process.  This is also part of the accompanying book.

Then there is the pristine 180-gram LP’s that were remastered to play at 45 rpms to push the original tapes to their limit and produce the best possible sound on vinyl. I love vinyl but it seems like it ends much too soon, especially when you love an album like I do this one. I can’t seem to hear this music enough, I enjoy it that much and always have. When you hear the term “timeless” as a reference point, it is usually directly connected to artists like The Beatles and Elvis, however I have to give the nod to Alan Parsons on this particular release. This music sounds as fresh and invigorating as when I first heard it. In fact, it sounds better than ever listening to it remastered and on a 5.1 surround sound system.

The coffee table book is a nice addition to the set as well. It is jam packed with information from the people that recorded the music and remastered it. It is a great addition to read while listening. It brings a new picture into focus of what you are listening to like never before. It goes together like a hand in glove. 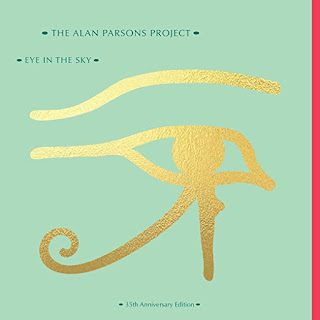 I have enjoyed many of the Parson’s releases over the years, in particular Turn of a Friendly Card and Tales of Mystery and Imagination. These were very different recordings however they are at the top of the list of my favorites from the Parson’s catalog coming right after Eye In The Sky. I think most music relates to different times of your life and for me it was one of the more exciting and transformational. I was discovering new music and traveling all over the world with the Navy. It is a time that matured me in ways I could have never imagined. Music was my best friend while out to sea for long periods of time. There was a peace and satisfaction I found on those open seas, and those feelings remain unmatched to this day. That is the joy I feel while reflecting upon my life listening to this amazing music.

If you don’t understand how this album came together after listening to all this music and reading the book then I suggest you do it more than once, you may have to anyway. My thought is, let’s give it another whirl, love it!

So, who knows what’s next from Mr. Parsons? Perhaps a world tour of this album presented on the stage fully backed by an orchestra with choreography and color? Or perhaps Cirque du Soleil performing with the music as their soundtrack? In the meantime, lets enjoy this great music presented in this box set.

Vinyl 1 Side 2
Gemini
Silence And I