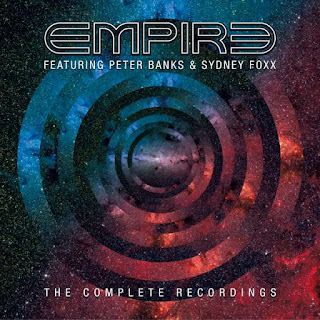 
London - EMPIRE FEATURING PETER BANKS & SYDNEY FOXX – THE COMPLETE RECORDINGS is the first release by The Peter Banks Musical Estate (via Cherry Red) and is also fully endorsed by Sydney Jordan (Foxx). The set includes the songs from all three EMPIRE studio albums and The Mars Tapes together in one place. The 40 page booklet features six different sets of liner notes and extensive pictures from the personal archives of band members. The audio has received a 2017 remaster.

“Thank you to Daniel Earnshaw, QEDG Management, Cherry Red Records, Carl Glover and Mike Pietrini for the remastering, design and release of this wonderful, definitive collection of 'Empire' recordings. Peter has always said that 'Empire' and the music we created was where his heart was and that it was the closest he had come to his dream of creating another band like 'YES'.  With 'Empire' we achieved 90% of what we set out to. 10% was lost to pressure from the industry and the misfortune of being in L.A. during the 'Disco Era'. But the 90% that remains in this complete collection of 'Empire' recordings is timeless, magical and yet another valuable musical testament to one of the most innovative and greatest guitar players ever, who co-created one of the greatest bands ever!” - Sydney Foxx

Peter Banks passed away in 2013 but his musical legacy will live on with a series of official definitive album releases throughout 2018 and 2019. The Peter Banks Musical Estate is represented by Daniel Earnshaw.

DISC TWO: THE MARS TAPES
1. OUT OF OUR HANDS
2. FOUNDATION/DESTINY/FARAWAY
3. SOMEWHERE OVER THE RAINBOW BAR AND GRILL
4. DO WHAT YOU WANT
5. DANCING MAN
6. SOMETHING’S COMING
7. THE FALL OF THE EMPIRE
8. WHEN THE BANKS OVERFLOW
9. ASCENDING TO THE PLANET MARS
10. AS SILENCE PREVAILS

DISC THREE: THE REST OF EMPIRE
1. EVERYTHING CHANGES
2. SKY AT NIGHT (MARK II VERSION)
3. STILL OUT OF OUR HANDS
4. GOODBYE
5. DESTINY (MARK II VERSION)
6. SOMEONE WHO CARES
7. AIN’T THAT PECULIAR
8. DANCING MAN
9. HEAR MY VOICE ON THE RADIO
10. WHO (Featuring Ray Bennett)