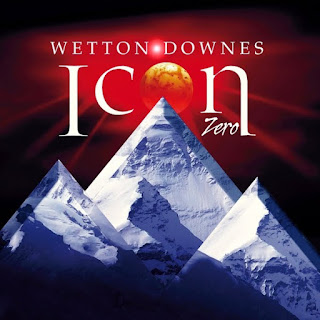 iCon Zero is a revised presentation of the Wetton/Downes album and is a precursor to their iCon series of albums. It is essentially a collection of tracks mostly recorded in the late 1980s through the time of their brief reformation in 1990.

The original version of the album was released in 2002 and in retrospect seemed like an iCon album from a previous era, so both John and Geoff readily agreed to it being brought into the iCon family. John came up with the name Zero, and both John and Geoff approved the new front cover artwork.

The album has received a 2017 remaster and includes two previously unreleased bonus tracks.

Geoff Downes reminisced about this time period in their joint career with these comments: Icon Zero brings back many fond memories of working with John back in the early-mid 80s. Despite being the principal writers for Asia, we both felt there was at least one other string to our bow. This manifested itself in later years as the Icon project, and this album is an insight into the inner workings of our early relationship, not just as members of Asia, but also as songwriters. These recordings were made largely at weekends when we rented demo studios to try out our ‘other’ ideas and simply - have some fun time away from the pressures of the music business. Most of these songs were put together in a few hours, and written on the fly. Then, they were recorded straight down that same day. One great aspect of this was, we always seemed came up with something new, and as the inspiration flowed it was captured there and then even in its embryonic form.

Sadly John Wetton passed away in January 2017, but this release was already on the cards, with his Estate and Geoff Downes approving it going ahead as originally planned.

Geoff Downes had these further comments about his late bandmate: “John was a genius in every sense of the word, and I am most privileged to have been a big part of his career. The Icon project in itself stands alone as a complete cycle of our work together, and this album (Icon Zero) displays an important part of that development. The great John Wetton’s unique presence can be felt on every note and lyric of these songs. Please enjoy.”

iCon Zero will be followed by definitive edition re-releases of the subsequent three iCon albums, with bonus tracks, during 2018 with Geoff Downes’ personal approval.