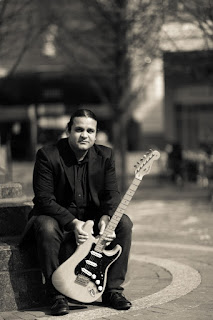 One of the most impressive albums of this year by Indo-Fusion guitarist Rahul Mukerji has been garnering enthusiastic reviews from the music press and fans alike worldwide! “Ma De Re Sha” was released in May 2017 and the response has been no less than astounding!

Says Rahul, “It has been an exhilarating experience seeing the positive reviews flood in and to see the album featured in prominent magazines and music outlets. I'm very grateful to the fans and people who helped make this album the success it has become.”

Rahul is a guitarist/musician based in Maryland, USA. Born in India, he has been performing live for over fifteen years. From dive bars and weddings, to crowds of thousands opening for the B-52s, he has had a varied performing career that has included gigs in Chicago, Boston, Maryland, Virginia, Washington D.C., and India.

Rahul has been featured on a wide array of recordings. His original pieces were featured in the short indie film “Tokyo Confidential.” His music was also featured on international and national radio stations and his compositions have been featured in various fractal and traditional animations videos and used in the official score for the Fractal Forums web episodes.

Rahul was featured in various publications like Songlines magazine, Pipeline magazine, and in 2008 Guitar Player Magazine Editors' Picks. He is also a guest Guitar Instructor on the Shred Academy website. In addition to music, Rahul is also an accomplished visual artist and regularly exhibits his work in the Washington metropolitan area. From the traditional to the digital domain, Rahul utilizes a wide array of mediums such as wood engraving, spray painting, pencil sketching, and computer fractal renderings.

From the source inspiration, to the concept, writing, arrangement, and its actual making, this project is truly a reflection of unity in diversity. This world fusion rock guitar album brings together flavors of Indian music, Middle Eastern percussion, jazz, ambient, rock, and metal. The compositions and the arrangements were inspired by interactions with people from different cultural backgrounds and walks of life, all filtered through the prism of Rahul's own multicultural upbringing between East and West. The actual making of the music involved coordination with musicians and mixing/mastering engineers living in the US, Germany, Spain, and France. 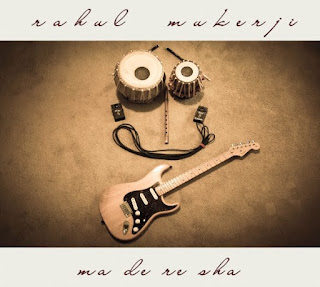 Here's what the press have been saying about Rahul Mukerji:

“His expressive guitar playing through 'Ma De Re Sha' demonstrates a dizzying range of technique and tone, while the compositions make a highly electrified fusion mix that borrows from Joe Satriani as much as John McLaughlin. These dynamic instrumental pieces stay most firmly rooted in rock mode, though it's an adeptly malleable one that always has room for exotic motifs. Mukerji's fretwork in any mode is fluid and buoyant enough to make his excitement contagious, and the result is an album happy to weave and blend all those elements until it's easy to forget they're so different at all.” - All About Jazz

“Ambitious, varied and at times full of energy, 'Ma De Re Sha' has the feel of Indian cinematic music more so than Indian classical music.  And it is really good...the breadth of his interests and potential that makes this an exciting debut.” - Amardeep Dhillon, Songlines Magazine

“This cat can play. Many influences can be heard, but I want to give Mukerji more credit than that. He takes those influences, and in some cases, is an improvement over them. I highly recommend 'Ma De Re Sha' be listened to immediately and often thereafter.” - Walter Kolosky, Author and host of the Jazz Rocks Podcast

“...Perhaps the best parts of Mukerji’s playing are the emotional buoyancy and lightness of being that run through his writing and playing, even the heaviest parts. His melodies and grooves flow through the ears and leave behind a sense of bold and positive creativity. This makes him an emerging artist to contend with, one who should do well even beyond the guitar community. Buy this record tonight!” - Mike O’Cull, IndieBandGuru

“...a vertiginous mix of tasty colors. 'Ma De Re Sha' is a rapture throughout announcing the advent of a new force on the fusion scene.” - Dmitry M. Epstein, Let It Rock

“... twelve succinct tunes that showcase his compositions and chops, brilliant melodies and inventive arrangements, one foot in his Indian culture and the other foot firmly in American instrumental rock, drawing influences from both and freely superimposing them on each other...There's a lot of variety among these dozen cuts to absorb, all performed with impeccable power and precision.” - Peter Thelen, Exposé Online

“Mukerji is an amazing guitarist and instrumentalist who is drawing comparisons to players as diverse and acclaimed as Joe Satriani, John McLaughlin, Al DiMeola and Steve Vai on his 13-track debut 'Ma De Re Sha.'” - Sights and Sounds of Note

“...a fusion album of the highest quality of musical excellence.” - Exclusive Magazine