"The Who and I" by Tony Klinger Box Set, Book and Memorabilia Now Available For Pre-Order 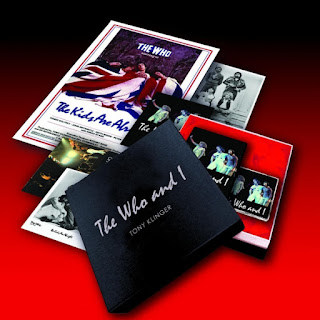 “Angry management, crazy people, women jumping naked out of giant cakes, fireworks going off in your hand, trips to the Pleasure Chest, run ins with Steve McQueen, afternoon teas with Ringo Starr, drunken sessions with Rick Danko of The Band, hotels demanding money up front before we checked in, travelling, constantly travelling, all the while trying to juggle schedules, money and egos, that's what I remember from my time with the Who when I was making a film, 'The Kids Are Alright' with, for and about them.

“The packaging of 'The Who and I' project accurately and faithfully represents the flavour of our project and the time we originally created the film, 'The Kids Are Alright,' and that forms the central themes of this project.

“I want to tell this story because there are so many of us, you and me included, who love rock music and film, who should know what really goes on, and this book tells it like it is. 'The Who' are the icons of both the sight and sound of My Generation. They sounded and looked angry and it wasn't an act. 'The Who' were among those who invented Mod England, which forced the world look up and pay attention. Their energy demanded your focus, whether it was Townshend's duck walk borrowed with love from Chuck Berry, his skinny whirling arms bashing out the chords, or Roger Daltrey swinging his microphone, more a weapon as he marched to the beat punched out by the bass played with metronomic intensity by the Ox, John Entwistle or the only drummer I ever saw who could lead a melody line, the maniacal Keith Moon.

“And then when you got past the image there was the music, that brilliant, original and fantastic music. How could such sounds spring out of such chaos? The answer is that it's the chaos that creates those sounds, that environment which enables a different view, a special sideways on look at our world that is so dynamic, true and genuine that we all have to take notice.

“'The Who,' maybe more than any other group epitomise that special rock lifestyle of danger mixed with brilliance to create a bubble of such power that we all want to see and listen and share.

“'The Who and I' was originally known as 'Twilight of the Gods.' So I am qualified by dint of knowledge about the group. More especially I know the men who make up the band and the originals who no longer get to go on stage because they're playing bass and drums with the celestial choir.

“Like most of you I am a fan, I remained a fan despite sometimes wanting to wring their collective necks! It’s well known and I documented the fact that we didn’t always agree with each other, in fact it would be more accurate to report that we hardly ever did so.” - Tony Klinger

To pre-order Tony Klinger's “The Who and I”  Box Set, Book and Memorabilia: https://www.pledgemusic.com/projects/the-who-and-i

Also available “The Kids Are Alright” Film Screening and a one off original Tour Jacket!