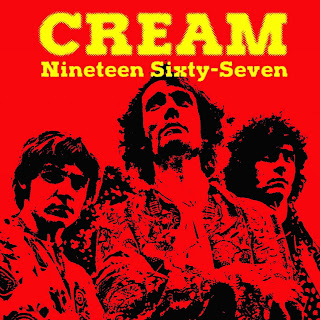 Cream Nineteen Sixty-Seven features a fantastic live recording made for Swedish radio in March 1967 and previously unreleased BBC radio sessions. Also included are live in-concert and live in the studio recordings made in the period leading up to their classic 1967 album Disraeli Gears.

Personally, I have always appreciated Cream and the talents of Eric Clapton (guitar, vocals), Jack Bruce (bass, vocals) and Ginger Baker (drums). I remember when the first round of the remastered catalog CD releases came out many years ago. I was in awe of their power and skill. They were the first supergroup trio that I can recollect.

This CD is a documentation of a band maturing from a rock-blues band to a progressive wide-open rock-blues improvisation unit. You can hear them stretching out on all of the eleven tracks. “Toad” for instance, just cuts loose on every instrument. Baker’s drums are simply phenomenal and of course, Bruce playing bass, keeping up with his rhythm section mate, is a true wonder. And last but not least is Clapton, peeling off some scorching licks on his six-string.

Cream was a band destined for music immortality and the music these three men made was incredible. If you stop and considered what they presented, it sounded more like 4 or 5 musicians. That is how amazing they were.

Nineteen Sixty-Seven is a fantastic recording considering how dated it is. The Vogon label did a nice job of curating and a mastering the tracks. They are as clear and concise as I could have hoped for from that time period.

Another example of how this band was cooking along is “Traintime,” with Bruce on harmonica. He definitely emulated a train rolling down the tracks on that blues burner.

Cream fans will be glad to know that this is not just for the completist. This is a group of recordings that have great historical value but at the same time hold up very well to this day. At some point, this release will be coming out on vinyl and I know I will want a copy.

The Vogon label has a growing library of releases of classic rock music. I have provided a link to the Discogs site so you can take a look for yourself.