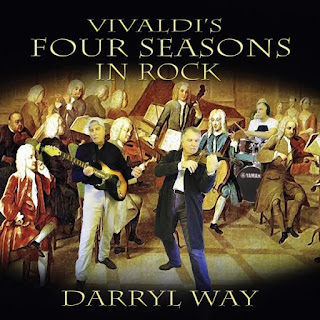 Almost 50 years after the creation of his classic rock anthem Vivaldi, Curved Air's trail blazing violinist Darryl Way, has arranged and recorded the whole of Vivaldi's masterpiece The Four Seasons and given it the same 'rock' treatment.

Way said of the project: “You cannot improve upon perfection, which the Four Seasons undoubtedly is, but I felt that the Four Seasons, a piece that has been a seminal influence in my life, would be fertile ground for a reinterpretation. Having said that, I have not changed any of the notes, except in some of the slow movements, where it is generally accepted that the written notes can be embellished. I have just added to the mix, rock instrumentation and rhythms, synth textures and in the slow movements, some chill out beats.”

The album is entitled Vivaldi's Four Seasons in Rock and is released on the 4th of May 2018 via Cherry Red Records.

“I already had a good idea that a rock arrangement could work with Vivaldi's music, from my work on the Curved Air track 'Vivaldi'. The challenge was, to maintain Vivaldi's original concept of the piece and tell the same story. Whether I have risen to that challenge is not for me to say, but if you were a fan of my Curved Air track 'Vivaldi', there's a good chance you're going to like this as well.”