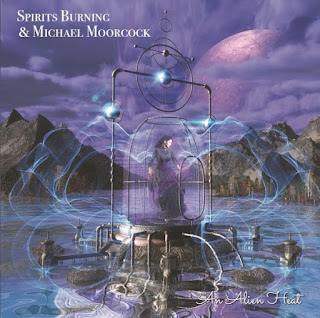 Michael Moorcock is an English writer, primarily of science fiction, fantasy, and literary novels. He is best known for his novels about Elric, and two stints as the editor of New Worlds Magazine. As a musician, he fronts Michael Moorcock & The Deep Fix, and has collaborated with Hawkwind, Blue Öyster Cult, Robert Calvert and Spirits Burning.

Don Falcone is an American producer, musician (keyboards, bass, and vocals), and captain of Spirits Burning. A live version of the band played in the UK in 2017, with Falcone on keys and vocals, and featuring Hawkwind family members Bridget Wishart, Richard Chadwick, and Steve Bemand.

Albert Bouchard is an American drummer, guitarist, singer, and songwriter. He was a founding member and drummer of Blue Öyster Cult. He also plays with his brother Joe in the Bouchard Brothers, and they are both in Blue Coupe with Dennis Dunaway from Alice Cooper.

Says Don Falcone, “The debut Spirits Burning & Michael Moorcock album came together, in so many special ways… I asked Mike if I could do an adaptation of the 'Dancers' trilogy, starting with 'An Alien Heat,' and he gave a long-distance blessing… Al Bouchard became a co-collaborator and helped improve every song. He also brought in some Blue Öyster Cult family members. The planned sessions with Mike came to fruition, and Mike ended up singing on most tracks, and playing harmonica on three.”

Albert Bouchard co-wrote and performs on 15 of 16 songs.

Fans of Michael Moorcock’s novels will be interested in this adaptation of “An Alien Heat,” which is part of the “The Dancers At The End Of Time” trilogy.