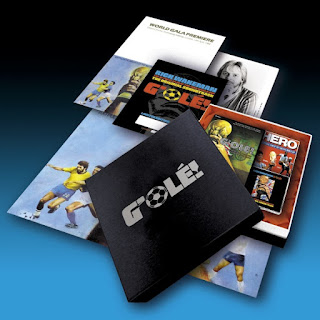 Narrated by Sean Connery, with music by Rick Wakeman, G'ole! captures the highly charged atmosphere of those few weeks in Spain, when the World's top 24 teams gathered to do battle.

It features…Italy winning despite half their squad being suspended for match fixing. Germany and Austria fixing their result to eliminate Algeria. A Kuwaiti Sheik invading the pitch and successfully getting a goal over turned. The Germany v France Semi Final which featured the worst foul in World Cup history, when Germany’s goalie Schumacher broke Patrick Battison's jaw. Schumacher then helped Germany beat France in the first ever penalty shoot out. 17 year old Maradona's arrival on the international scene – then getting sent off for kicking a Brazilian in the nuts. Northern Ireland beating hosts Spain (that goal from Trainspotting). And England getting knocked out despite not losing a game. It was an amazing tournament.

Not only that, we get to see New Zealand's players getting a half time bollocking and topless girls on the beaches. This is FIFA after all.

Age 23 Sean Connery played for Bonnyrig Rose FC. Sir Matt Busby was impressed by his fellow Scot, offering him a £25-a-week contract at Old Trafford. “I really wanted to accept because I loved football,” recalled Connery. “But I realised that a top-class footballer could be over the hill by the age of 30, and I was already 23. I decided to become an actor and it turned out to be one of my more intelligent moves.”

“G'ole! finds Wakeman experimenting again with the staccato rhythms and percussion of "White Rock," and overlaying this with the broad synth strokes that he developed on 'Rhapsodies.” - All Music Guide