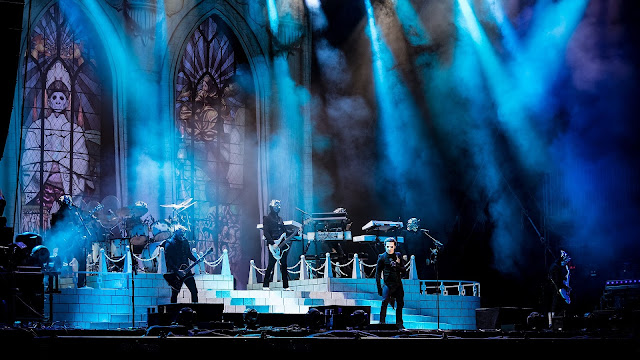 With winter upon us in the great Northeast, it was just another night. We never have a reason to stay in because of the weather, we just go. It so happened that it was a nice evening for a drive to a Ghost concert.  We secured our tickets months ago and have been anticipating this night for months on end.

Last July I attended a “bucket list” concert, the great Iron Maiden was coming to Mansfield, MA. Opening for them was Ghost. This was a turn of a friendly card for the band, a great way to get worldwide exposure otherwise not afforded by a lesser band. They were already on the rise and the lead singer Papa Emeritus had a helluva a band (no pun intended there). At that time my prediction was that when the new year began Ghost would be headlining their own shows. So, then it happened, here we are tonight watching this incredible metal band headlining their own show, with no opener may I add.

For those of you unfortunate, tortured, misled souls that may not be familiar with Ghost, here is a bit of information I grabbed from Wikipedia.

Tobias Forge obscured his identity behind the character "Papa Emeritus". The character, which consists of Forge in a prosthetic mask and makeup can be best described as a 'demonic anti-pope'. The Papa Emeritus Character has gone through four incarnations - I, II, III, and Nihil. As of the 2018 album Prequelle and subsequent world tour, Forge portrays a character known as "Cardinal Copia," who is described as being unrelated to any of the Papa Emeritus characters and whose costume consists of either Cardinal vestments or a black or white tuxedo alongside a prosthetic mask with black eye makeup and the multi-colored eyes which had been present in each Papa character.

Ghost is quite theatrical and I expected much of what I saw. What I did not anticipate was a 7-piece band! Now the lead singer has 3 guitar players, and two ladies, who are referred to a Lionesses, on keyboards and of course the Nameless Ghouls. As with any bands rise to popularity a culture is created within and this is no exception. There were people there in the audience with the full Papa makeup and Santa Claus stocking caps and one dude was fully decked out as the Cardinal. It reminded me of the days when Kiss were on their meteoric rise and people would go out on Halloween as one of the band members. This is entertainment at its highest level as far as I am concerned.

The Ghost band is like a well-oiled machine. Seeing them two dates before the tour ends surely showed how well versed they were with their musical acumen and stage presence. Speaking of presence, Cardinal Copia has become masterful at playing to the crowd and getting a response. Many times, during each song he would yell “Are you with us Albany!” That would always get a rise in the decibel level of voices and whistles.

They opened with the raucous “Rats.” That was a perfect tone-setter for the night. I have included the official video which has over 15 million views and counting right now! There is one guitar player who is the lead, and second, that is a good match to exchange riffs with, they stand on either side of the Cardinal. In the back, you have the third guitar player who is there for a lot of background vocals, tambourine, posturing, and some electric guitar playing to accentuate the other two. The addition of the two ladies on keyboard adds that extra layer of music that at times pushes their music to the border of progressive metal. Do not fear metalheads, I did say “border,” and it is one that they have not crossed over, not yet anyway. Who knows what the future holds in the creative mind of Tobias, the master of disguise?

The setlist encompassed 3 hours and they certainly have enough material to fill that time. 28 songs were covered and it was a great mix with older material and great versions of songs from the amazing Prequelle album. My belief is that they will win the Grammy for the best metal album of 2018. They are spot and precise as any band I have heard live going their list of studio recordings.

The musicianship was outstanding all night and the transitions from the heavier songs like “Mummy Dust,” the real ass wobbler as the Cardinal coined, to the most recent rock-oriented tracks like “Life Eternal,” we got all the different aspects of this talented group encapsulated into one exciting package.

Ghost is at the top of their game now and is taking full advantage of their popularity. I do not mind paying $40 for a souvenir t-shirt to support a band that truly deserves it and they most certainly do! I hope their success continues and I would expect it would.

The difference last night and what I saw a year ago was a band with more punch, precision and extra oomph with the added members. If you like theatrical music and love heavy metal, Ghost is a sure bet to please that preference. I cannot think of a better band in the metal genre right now and would see them again without a second thought.

"The original internet “MuzikMan” Reviewer since 1998!”