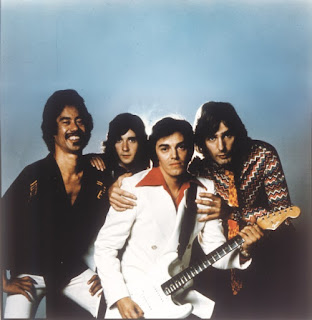 Recorded in the Autumn of 1975 at Abbey Road studios (with some sessions also taking place at AIR studios in London), SUNBURST FINISH was the third album by Be-Bop Deluxe and the first to feature the line-up of BILL NELSON (vocals, guitars, keyboards), CHARLIE TUMAHAI (bass, vocals), ANDY CLARK (keyboards) and SIMON FOX (drums). It was also the first BE-BOP DELUXE album to be co-produced by BILL NELSON and JOHN LECKIE. An album of immense musical inventiveness and creativity, SUNBURST FINISH was one of the finest albums of its era, a perfect cohesion of ten classic songs written by BILL NELSON (featuring his highly imaginative guitar playing) and a stylized and striking artwork package. Featuring such classic material as “Heavenly Homes”, “Crying to the Sky”, “Sleep that Burns”, “Life in the Air Age”, “Crystal Gazing” and “Blazing Apostles”, the album also spawned the hit single “Ships in the Night” and launched BE-BOP DELUXE as one of the major breakthrough acts of 1976. 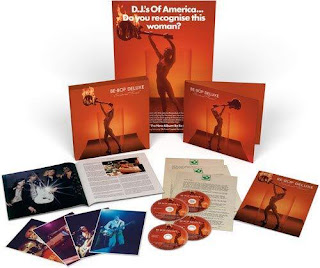 This expanded reissue has been newly re-mastered from the original master tapes and features an additional 39 bonus tracks drawn from a stunning new 5.1 surround sound & stereo mixes from the original multi-track tapes by award winning engineer Stephen W. Tayler, previously unreleased out-takes from the album sessions, a BBC Radio “In Concert” performance from January 1976, a rare John Peel Show session from February 1976 (unavailable on CD for over twenty years), along with an unissued and previously unreleased 1976 Harvest Records promotional video for “Ships in the Night” and a session for BBC TV's “Old Grey Whistle Test” show from January 1976.

Another highlight of this limited edition boxed set is the lavishly illustrated 68-page book with many previously unseen photographs and an essay of recollections by Bill Nelson. Additionally, the set includes a facsimile of the 1976 SUNBURST FINISH tour programme, postcards and a replica poster. This special deluxe limited edition boxed set of SUNBURST FINISH is a fitting tribute to a fine band, the creative vision of Bill Nelson and a wonderful album.