Progressive Rock LP Review: The Hallucinant Telepherique-Absorbed By The Forest 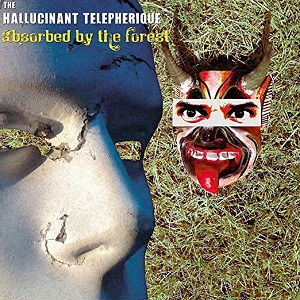 The Montoya Brothers, Sergio and Gino, are The  Hallucinant Telepherique. In other words, they are saying they are a hallucinate cable car or cableway. Their 2015 debut is titled Absorbed By The Forest, a nine-track instrumental progressive voyage. They are originally from Peru and reside in Texas.

What happened with the LP they sent me, well, it was absorbed by my music collection, it got lost in the shuffle as they say. At times this can happen in the world of a reviewer.

I am so glad I found the LP and my apologies go out the brothers. The artwork is eye-catching and bizarre, actually perfect for a prog album. It is time the prog community started paying more attention to this music. This is one album that has flown under the wire, unfortunately.

Sergio is the main driving force of the band contributing guitar, bass, keyboards and vocals, an entire band worth of instruments so essentially a one-man-show.  Brother Gino played lead guitar on the track “Sanctuary.”  All the music with the exception of “Sanctuary” was written and produced Sergio. I would say that is a lot of talent to possess for one artist and then have the intestinal fortitude to record the first album without any help says a lot about the man.

I really enjoyed Absorbed By The Forest quite a lot and I mean from beginning to end. There are no throwaway tracks on the album. Sergio works from strength to strength, which obviously is everything! I am always so impressed by that kind of drive and passion and you can hear it in the music.

The music ranges from keyboard driven rock to jazz-rock fusion influenced passages. The diversity of selection is the modus operandi here. Because the music is instrumental it has to be interesting consistently. Most popular prog music includes tracks with lyrics and long instrumental runs so I think there is enough here for most prog lovers to find interesting and entertaining. On their Facebook page, they say “Absorbed by the Forest is a collection of instrumental tracks that flow through dynamic moods echoing the sounds of classics prog giants like Camel, Pink Floyd, Genesis, and King Crimson.” Ok, I can go with that assessment as all three of those bands put out some very intense eclectic music over their careers. I would add that they do “echo” it rather than trying to duplicate or emulate it. They need to mature quite a bit more to reach that esteemed level.

Absorbed By The Forest may be 4 years old now but I think we all need to get caught up to this marvelous music and inspire the creator to get back into the studio to continue on. This a solid debut that deserves much more attention than it has received.