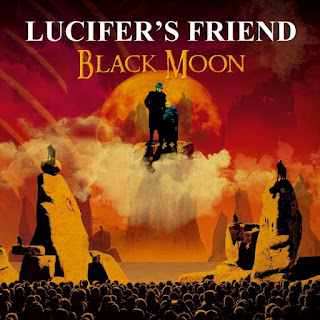 After many years of silence from the band, we get the second studio album of the reunion era.

The highly acclaimed 2016 release TOO LATE TO HATE was the long awaited album the fans had been asking for... and now LUCIFER’S FRIEND bring us BLACK MOON.

10 new tracks all written by HESSLEIN / LAWTON with Peter Hesslein supplying not only the guitar tracks but keyboards as well...it also features 2 guest musicians in CHUCK FINDLEY (trumpet solo on BLACK MOON) and STEFAN PINTEV (electric violin solo on FREEDOM).

Produced and mixed by Simon Hesslein in New York with cover design by Damian Bydlinski...this album is another milestone in the band’s history...