Concert Review: Living The Dream With Judas Priest and Uriah Heep At The Palace Theater In Albany, NY

Living The Dream With Judas Priest and Uriah Heep At The Palace Theater In Albany, NY
MAY 18, 2019 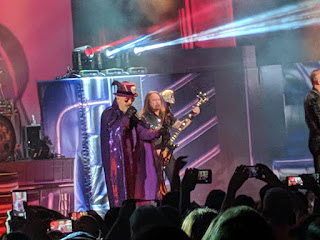 This was a double bill that I have waited for months to see. This was also one of many times that I have seen Judas Priest however the first time I had the opportunity to see Uriah Heep.  I have been a fan of Uriah Heep since the 70s and have all the early studio releases along with a few when lead singer Bernie Shaw came into the picture. In addition to that, I had just picked up their most recent studio effort and 25th mind you, titled Living The Dream.  The album is excellent and their strongest in quite some time. I think they decided to reach back and take some of the elements that made them who they are along with more modern technologies and recording tools to come up with a real winner. And yes, it rocks, making them the perfect opening act for Judas Priest.

Mick Box started the band in 1970, bless his soul. He is the only surviving original member left, and it’s a good thing because they are not UH without him. He looks great with his long white hair and energetic guitar playing, which was from start to finish. He captured the audience immediately and that grew as they made their way through the new and the classic tracks.

Bernie Shaw mentioned how hard it was to go through 50 years of music in one hour but they did a fine job. I would love to see a full-length show with them at some point. I brought one of my friends with me that loves metal and has been following both bands forever like myself and you could not wipe the smile off his face all night, it was a beautiful thing to witness and just as satisfying as the music itself from my own perspective.

Uriah Heep which is a fictional character created by Charles Dickens in his novel David Copperfield. Heep is one of the main antagonists of the novel. His character is notable for his cloying humility, obsequiousness, and insincerity, making frequent references to his own " 'umbleness." So how many of you UH fans remember how that relates to an album title? If you guessed Very 'Eavy... Very 'Umble you are correct! There was a time when I had no clue how all this tied into the name of the band and that book. 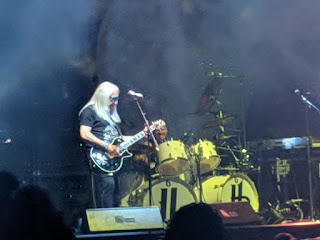 While the visit was short with Uriah Heep, it was long enough to know that they are still alive and well and rockin’. It gave me the incentive to catch them live again. I really appreciate how they performed the early rockers “Gypsy,” “Stealin’” and “Look At Yourself.”

So, the standard break started and they prepared the stage for the headliner that everyone was clamoring for. Everyone was chanting “Priest, Priest, Priest.”  That is a tradition at the concerts as all fans of the band know. As Rob Halford acknowledged, heavy metal fans and the overall community are the most dedicated group and they could not do what they do without us. It goes both ways Rob and we love the fact that you are still coming out to bring all that great music to us!

The opening song was “Necromancer” from their latest album Firepower. Rob came out in a new outfit for the number. I just had to get a pic of that and include it with this review. It was a great way to kick things off and the audience was pumped and ready for everything that they were going to dish out. I would say this crowd is very enthusiastic and partiers, I being enthusiastic minus all the partying. There was a couple behind me that polished of their share of alcoholic beverages but were still well behaved even though one of them spilled some of their drink on my head and left an empty cup in my seat. I know it sounds comical actually and that is exactly how I took it and carried on with a smile and enjoyed the entire spirit of the evening.

Priest covered some ground, going through their early career to promoting the newest release with some cool videos as a backdrop to their juggernaut two-man tag team guitar players of Richie Faulkner and  Andy Sneap. And it goes without saying that the rhythm section of Ian Hill (bass) and Scott Travis (drums) is the foundation of their explosive sound.  The two six-string slingers have turned into admirable replacements for the legendary one-two punch of Glen Tipton and K.K. Downing.  They are great players and have assimilated the Priest cannon with dedication and fire that has kept things moving right along so we all can still enjoy their studio recordings and live shows.


They saved all the fan favorites for their encore which included, "Hell Bent for Leather," "Breaking the Law" and "Living After Midnight."

With another memorable night in the books, it makes me feel blessed to be alive and able to have the privilege of attending these great live events and provide coverage. Another big thanks to my long-time partners at Chipster PR for providing me the great seats to enjoy last night to the fullest. I was fully drenched in sweat and voicing my approval along with three thousand some fans in attendance. And that enthusiasm continued into the streets after, people were buzzing and chanting all over again.

If you’re looking for a dream come true double header metal concert you need to catch this show!

Judas Priest:
Necromancer Intro
Necromancer
Heading Out to the Highway
(Take These) Chains
The Sentinel
Spectre
Judas Rising
Out in the Cold
Traitors Gate
Starbreaker
Steeler
Halls of Valhalla
Prelude
Tyrant
No Surrender
Victim of Changes
All Guns Blazing
Encore:
Hell Bent for Leather
Breaking the Law
Living After Midnight