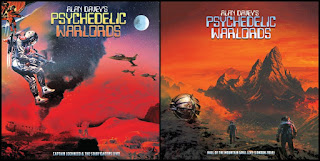 Los Angeles, CA - Former Hawkwind bassist Alan Davey has juggled a number of different projects over the course of his long career in music - from the Western-themed outfit Gunslinger, to the Middle East-tinged Bedouin and, more recently, the incredibly ambitious Hawkwind supergroup Hawkestrel, made up of 9 alumni of that quintessential and legendary British space/psych band. But before there was Hawkestrel, there was The Psychedelic Warlords! Named after the lead off track from Hawkwind’s fifth album, 1974’s Hall Of The Mountain Grill, the band consists of frontman Craig High, keyboardist Zoie Green, guitarist Simon Wilkins and drummer Billy Fleming on drums (who worked as Motörhead’s drum tech for 12 years) with Davey on bass, of course. In 2014, this troop set up an epic concert performances to celebrate the 40th anniversary of 2 landmark albums, which they played in their entirety - the aforementioned Hall Of The Mountain Grill by Hawkwind as well as Robert Calvert’s debut solo album, the masterful Captain Lockheed And The Starfighters. It was an acid trip down memory lane like no other for that London audience, and now fans around the world can join the fun on 2 live albums to be released two weeks apart.

Coming on September 27, Alan Davey’s Psychedelic Warlords will release Hall Of The Mountain Grill (London 2014) on both CD in a special digipak and a 2LP vinyl set of limited edition ORANGE vinyl! Then, on October 11 comes, Captain Lockheed & The Starfighters Live! also released on digipak CD and in a single LP vinyl set in limited edition YELLOW vinyl. As an added bonus, each of the vinyl editions has been hand-signed by Mr. Davey himself.

Davey shares some thoughts on the live performances: “Lemmy once told me Hall of the Mountain Grill was his favorite Hawkwind album so celebrating the 40th anniversary of its release in 2014 seemed like a must-do to me. The same year in 1974 Bob Calvert's classic album Captain Lockheed and the Starfighers was also released so matching the two albums together in one live show was a no brainer to me. Also, the Captain Lockheed album was never performed live so this was gonna be a real treat for Hawkwind fans! The venues were packed, the engines were running and everyone in the audience was blown away by the Psychedelic Warlords’ renditions of these two great albums. So glad we had the foresight to record the London show so now all Hawkwind fans can enjoy the moment!”

CAPTAIN LOCKHEED AND THE STARFIGHTERS LIVE!
1. Franz Josef Strauss, Defence Minister, Reviews The Luftwaffe In 1958 Finding It Somewhat Lacking In Image Potential
2. The Aerospaceage Inferno
3. Aircraft Salesmen (A Door In The Foot)
4. The Widow Maker
5. Two Test Pilots Discuss The Starfighter’s Performance
6. The Right Stuff
7. The Song Of The Gremlin (Part 1)
8. Hero With A Wing
9. Ground Control To Pilot
10. Ejection
11. I Resign
12. The Song Of The Gremlin (Part 2)
13. Bier Garten
14. Catch A Falling Starfighter