Progressive Rock-Jazz -Fusion Review: Yuval Ron-Somewhere in the Universe Somebody Hits a Drum 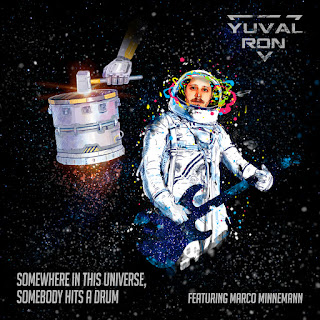 One look at the album art and a minute into the opening title track, you'll realize you're about to explore a new musical world and boldly go where no listener has gone before. You'll hear yodeling, synth landscapes, xylophone interludes, and virtuosic guitar riffs riding on the rhythm of thick, syncopating drumbeats. Along the journey, you'll experience moments of weightlessness followed by playful interludes followed by turbo thrusts where the universe flies past you in a blur.

Like many of his influences, Yuval Ron has collaborated with several musicians in several bands, including the influential Residents of The Future. His talents cannot be constrained to the fixed structure of a single band. Yuval Ron assembles musicians for a project based on the vision in his head.

For Somewhere in the Universe Somebody Hits a Drum, he recruited renowned prog-rock drummer Marco Minnemann who has worked with Steven Wilson, The Aristocrats, and others. Mr. Minnemann's influence is hard to ignore, providing the grounding for complex synth and guitar solos as well as flashes of brilliance such as "Wifi in Emerald City" when his drumming emerges into the forefront but does not overtake the composition.

Not one of these six tracks sounds indulgent or derivative. Yuval Ron democratizes the talent he's assembled. He shares the spotlight, letting the solos fly and then return to form a colorful assembly of textured sound. You'll feel as if you're on a journey of discovery. You won't know where you are, you won't know where you're going, but you'll be thrilled to be on the ride.

Key Tracks Include: “Gravitational Lensing”, “Wifi in Emerald City”, “I Believe in Astronauts”

Tracks:
1. Somewhere in This Universe Somebody Hits a Drum
2. Gravitational Lensing
3. Kuiper Belt
4. WiFi in Emerald City
5. The Discovery of Phoebe
6. I Believe in Astronauts