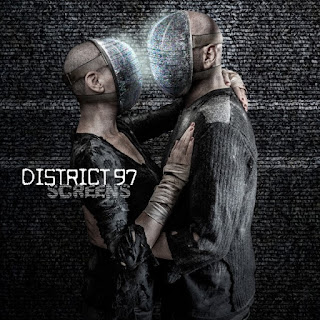 The Chicago-based prog-rock quintet, District 97, is back with a new studio release, Screens. Both the band and their sound have evolved through several incarnations since their inception in 2006. The band started as an instrumental rock band until changing direction in 2007 when American Idol finalist, Leslie Hunt, joined as vocalist. A few years later, a renowned Chicago Symphony Orchestra cellist, Katinka Kleijn joined the band as well. Ms. Hunt’s vocals capture the angst of society’s marginalized. Her vocals, combined with the unabashed musicianship, form a curious, yet absorbing the sonic experience.

Screens pick up where the band’s previous three studio albums leave off, with a more evolved and accessible sound. Therein lies one challenge I faced as a listener, blending the stylistic, almost pop vocals into what feels like an unnatural prog-rock habitat. As a result, I found it hard to surrender completely. Just as the Zappa-esque prog/jazz/fusion creativity takes me in one direction, the glossy vocals take over and pull me in another.

Songs like “Bread & Yarn,” where vocals are more subdued and democratized, stand out. “ShapeShifter” and “Ghost Girl” come closer to vocal/musical synergy as Hunt sounds a bit less polished and produced. This suits the twists and turns of the undercurrent well. Vocals aside, some masterful performances are starting with Jim Tashjian’s jazz-infused guitar licks where he takes the listener on short sprees away from the rhythm and masterfully returns them to the start. Founder Jonathan Schang’s drumming is clever, accomplished, and brings forth rhythmic illusions in the vein of Gavin Harrison of King Crimson and Porcupine Tree.

While the blend of pop and heavy prog may not be everyone’s cup of tea, one can tell by the skill of the players, the shifting tempos, and the spaces left between the notes that District 97 would be an engaging live band. The One More Red Night album released in 2014 confirms the assertion.

Overall, District 97 embodies the Prog rock principals of pushing the envelope and opening the listener’s mind to new sonic possibilities. This is a modern progressive sound that melds elements not typically melded together. While Screens shines in places, this listener had to work to find them and did not become as absorbed as he had hoped.