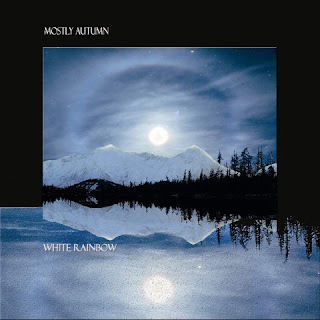 The artwork on Mostly Autumn's latest offering, White Rainbow, depicts a mirrored sunrise over a snowy mountain encompassed by a white rainbow.  The image is apt, as the album reflects genuinely on the loss of their former and longtime guitarist Liam Davison, while at the same time, pointing the way to new beginnings.
After 12 studio albums, most bands find a groove that works and ride in comfort within it.  Mostly Autumn's 13th album finds the band breaking out of any supposed rut and venturing forth to produce a modern-day progressive folk-rock masterwork.
Each track on White Rainbow is a story unto itself.  Filled with atmosphere, conflict, and triumph, crescendos rise at the point of epiphany and fall upon the listener with beauty and grace.  At seventy-nine minutes, Mostly Autumn feels in a sense like a movie soundtrack supporting a majestic drama.  Celtic folk undertones place the listener in the mind of proud warriors riding through the countryside on a quest to rescue their captured Queen. Valhalla, be damned.
The slow atmospheric intros are joined by soaring vocal harmony and accentuated by torrents of accomplished guitar work.  At the point when the listener feels the song has reached its peak, Mostly Autumn rises to another level. Therein lies the beauty of blending folk sensibilities with progressive stylings. The songs don't have to end where one thinks they might.  White Rainbow leads the listener into a false sense of calm and security and then hit you with a guitar-driven onslaught leaving you weakened, yet exhilarated.
The energy behind this orchestration is Olivia Sparnenn's voice, which packs the one-two punch of power and vulnerability. Think of the dramatic soprano of Ann Wilson intermingled with the tenderness of (dare I say) Olivia Newton-John. Ms. Sparnenn's vocals layered upon such vibrant musicianship put this listener in the mind of Sandy Denny on Led Zeppelin's Battle of Evermore.
All in all, Mostly Autumn’s White Rainbow is a polished work whose whole is greater than the sum of its parts.  Listen to it straight through, and you'll realize the depth and breadth of its brilliance.  This is a progressive rock treasure you'll be thrilled you discovered and a musical dream from which you won't want to wake.
Key Tracks Include: “Burn”, “Run for the Sun”, “Western Skies”, “Into the Stars”, “The Undertow”