Progressive Metal Review: Sonus Corona-Time Is Not on Your Side 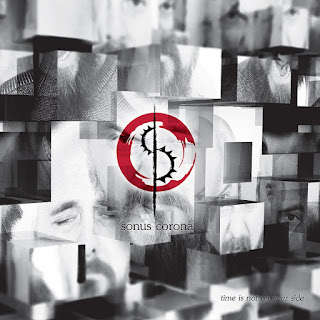 It’s always a pleasure to review an album before it releases. I was not familiar with Sonus Corona before this review, so it will still be fairly unbiased. Time Is Not On Your Side releases tomorrow, which is exactly the kind of title I would expect from a metal band. From what I gathered off the internet, the band formed in 2015. The six members are from Finland and have been turning the music industry upside down these past few years.

“Induction” grabs my attention with its eerie intro and ominous synths. It takes a minute, but it eventually moves into the metal sound that I was expecting. You get two for one, considering this is a five-minute song. The ending is a little abrupt, but I also didn’t mind it. The lead vocals are a nice surprise. There are some good harmonies, and for the most part, they are pretty clean for the metal genre.

The next song pretty much has every real and synthetic instrument that you could imagine on it. “Unreal” is a cool track. I can’t make out what the lyrics are, but I can appreciate the different vocal stylings that the singer jumps between. It almost has a Michael Bublé feel during the verses, but then it jumps to clean spoken vocals. I think the singer just wanted to show off his talents. “Moment Of Reckoning” seems like it has a mid-song crisis, where it has fun, yet out of place, 80’s space-aged solos spread throughout. It seems that there isn’t much that this band can’t come up with, but I also think that it makes the album a little overwhelming for people who have yet to get acclimated to the band.

“Oblivion” makes me think of heaven or something like that. Maybe it’s the lyrics, or the title, or the fact that the three-part-harmonies sound God-like. There is a ton of reverb on the vocals, which probably explains why they sound so heavenly. “Illusions” is one of the shortest songs on the album, even though it is the same length as the average song on the radio. I would say it is a soft rock song since there aren’t even any electric instruments on it. It’s a nice little intermission, before getting back to your regularly scheduled metal on the second part of the album.

This band has its own thing going on, and I would even say they have created their own sub-category of metal. I would call it like a progressive-galactic metal, or a tolerable-for-hipsters metal. Overall, I like the innovation that Sonus Corona brings to the space. Their strange combination of chords and instrumental pairings keeps the listener interested in what is to come next. If you like quirky bands, or you’re looking for something different from most of the music on the radio, check out Sonus Corona. Time Is Not On Your Side will be out by the time that this review posts, so go ahead and show them some love by picking up a copy.