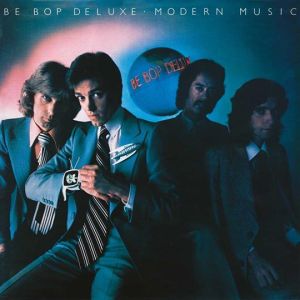 Born out of the blues-based British rock scene of the late 1960s, Be-Bop Deluxe are part glam, part pop, part punk, and part prog. This limited five disk (4 CD/1 DVD) reissue of their 1976 classic Modern Music is a complete remaster from the original tapes. The box set contains unreleased out-takes, a BBC Radio concert performance, A TV session from BBC’s Old Grey Whistle Test, and a previously unreleased bootleg of a performance at the Riviera Theater in Chicago. These recordings were all captured during the height of the band’s creativity in 1976.

Founder Bill Nelson’s vocals conjure the earthiness of Billy Joel mixed with the gravitas of David Bowie. Lyrically, the album was inspired by the disillusionment Nelson felt toward the music business after touring the U.S. and a longing for home. Far ahead of their time, one doesn’t have to listen too carefully to hear the influence they had on post-punk English bands such as The Jam, XTC & Joy Division.

Disc 1 contains the remastered album in its entirety. “Kiss of Light” is chockfull of catchy hooks amplified by screaming guitar. It is but one side of the band as they switch gears with a softer, multi-textured beauty in “The Gold at the End of My Rainbow.” “Shine” is an extended seven-minute rock and funk jam initially released as the B side to “Kiss of Light” and this reviewer’s personal favorite.

Disc 2 is the real gem of the collection with “First Versions” and “New Stereo Mixes” of the entire album.  Those that stand out are: “The Bird Charmer’s Destiny” and “Forbidden Lovers.” Free from the sanitization of heavy production, these tracks are sharp, organic renditions, and the heart and soul of the collection. The “New Stereo Mixes” give the listener a feel for how alternative arrangements may have affected the final song.

Disc 3 gives the listener a taste of Modern Music live, with select tracks from a live show at the Hammersmith Odeon in London. “Blazing Apostles” is an extended twelve-minute sojourn where the progressive runs of Nelson’s concise guitar work are met with Simon Fox’s deep rhythms and Andrew Clark’s dancing piano riffs. This respite rings a bell in the harbor of your mind, clearing the fog and guiding you safely to shore.

While Disc 3 constrains itself to Modern Music, Disc 4 reaches back with music from the band’s first three albums, Axe Victim (1974), Futurama (1975), and Sunburst (1976) live from Riviera Theater in Chicago. Previously unreleased, the live guitar work of Bill Nelson on this disk is exceptional and will leave you wondering how he flew under the radar for so long and never reached the commercial success he so deserves. On this disc, you’ll hear the unrestrained sounds of the band breathing new life into their most popular hits at the time.

Be-Bop Deluxe is a sound you’ll feel you’ve heard before, yet it is unlike anything you’ve heard before. Textures, even within the same songs, are interspersed to produce a profound effect. You’ll hear T-Rex-like rock riffs followed by Genesis-like playful explorations followed by Jeff Buckley-like resonant vocals. If you’re discovering Be-Bop Deluxe for the first time, you’ll be pleasantly surprised and feel as if you’ve unearthed a real gem.  If you’ve known them all along, this reissue, especially Disc 2 and 4, will take your appreciation to new heights.