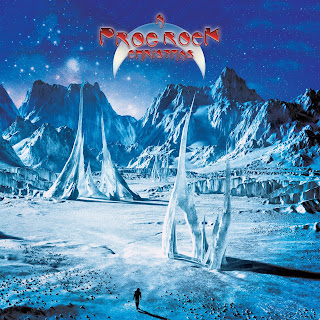 Imagine looking forward to eating at a hyped new restaurant, only to have them lose your reservation, serve you an undercooked entrée, and an overcooked side. Such is the experience of listening to A Prog Rock Christmas. I had hoped this collection would deliver a progressive twist of sonic experimentation to these seasonal standards. What it provides is ordinary fare minus any prog-rock flights of fancy I had anticipated.

Producer Billy Sherwood, currently of Yes, would have been well served with advice to focus on quality over quantity. Six or eight tracks that elevate and push the boundaries of these classics would have been preferable to the thirteen tracks, which offer little to no such exploration.

Leslie Hunt and Robin McAuley attempting to cover “Fairytale of New York” is either brave or ill-advised. I’d side with the latter as no version will ever come close to the bittersweet growling of the Shane MacGowan & Kirsty MacColl rendition. Malcolm McDowell as the mean one, Mr. Grinch is so pedestrian and dull, I forgot I was even listening to it and walked out of the room.

While as a whole, the offering is tepid at best, there are a few individual gems hidden in the rough, which would serve the listener well by adding to a holiday playlist. “Carol of the Bells” by Steve Morse is one such track that actually sounds progressive. “Linus & Lucy” by Geoff Downes is a much-needed playful number. The jazz-fused piano bounces in your ears and sounds fresh. “Happy Christmas (War Is Over) by John Wetton” is soulful and hearty, yet comes across as more country-western than progressive.

All in all, there is very little “prog” in A Prog Rock Christmas. If you’re looking for some standards interpreted by apt musicians for your office holiday party, this album will serve you well. If you’re looking for an envelope-pushing take on these classics, you’d be better served looking elsewhere. One such place might be The Jethro Tull Christmas Album. It is a season’s celebration with original material mixed with Ian Andersen-interpreted traditional arrangements. It will leave you feeling like Scrooge after his journey with the ghosts of Christmas past, present, and future, full of hope and cheer at the promise of redemption and the essence of Christmas itself.