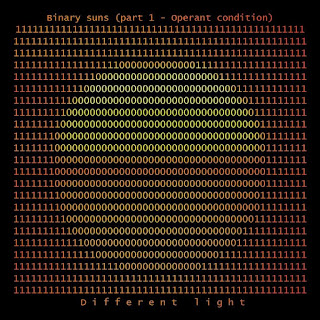 The band, Different Light, was initially formed in 1994 in Malta. The first of four albums were released in 1996, All About Yourself. In 1999, the band disbanded and later, in 2004, Trevor Tabone, an original member, reformed the band in the Czech Republic. Three albums have followed from this reformed band, Icons That Weep (2009), The Burden Of Paradise (2016) and the album in this review, Binary Suns (2020).

The current lineup of the band is Trevor Tabone (vocals/keyboards), Petr Lux (guitar/backing vocals), Jirka Matousek (bass) and David Filak (drums). Binary Suns has been an album I have looked forward to hearing, as the previous release I found to be a stunning work. It is fair to say that I have in no way been disappointed now that Binary Suns has been issued.

Opening the album is “Amphibious” (8:51) which is a mini-suite made up of four parts. This starts with a piano intro into a repeated passage that ebbs and flows and carries the listener along. Around the 1:30 minute mark, there is a simple piano theme, backed by a soaring guitar which leads to the vocals and a superb piano backing by Trevor. The melody is a real hook that builds up and moves along with those crystal-clear vocals catching the ear of the listener. Just before the 6:00 minute mark, the tempo drops to leave just the vocals and piano as the mainstay, before returning to the more involved melodious, harmonious part of the track. At just under 9:00 minutes, this is a stunning track, carried off and out with a superb piece of guitar work by Petr.

A shorter track, “Faith” (4:09) continues the harmonious smooth vocals so prevalent on the opening track. Although not too obvious, there is a hook that edges into your mind and “plants its feet firmly.” The piano again is the major instrument and I find it refreshing that it is the main keyboard used. More keyboards join the piano as well as some terrific guitar riffs. This is another superb track that fades out with the sound of a rainstorm.

“Spectres And Permanent Apparitions” (21:31) is track three, the longest track on Binary Suns and is in seven parts. By this track, the listener should be aware that this is an exceptional album and the changes in tempo throughout the 21+ minutes merge smoothly and flow easily allowing the listener to drift along, immersed in the music. Little hooks are scattered liberally throughout the track and weave in and out, acting almost as touchstones on the 21+ minute journey. This is a band that works as a very tight unit and appears to be totally in tune with each other.

Binary Suns is a superb release and takes the amazing music contained on album 3, The Burden Of Paradise, to a higher level. It may only be March but I think that I have already found one of my “best of 2020” albums. All I have to say about Binary Suns (Pt 1 Operant Condition) is “do yourself a huge favor and buy it at the earliest opportunity.” I am close to 100% sure that no-one will be disappointed.

6. On The Borderline (10.45)
a) Talking To Strangers
b) Seduction
c) Obsession
d) Vindication
e) Demonic
f) Now Just Go Away