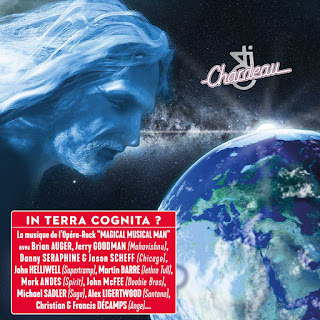 A chanting overture, “Evolution,” leads into a battle-like track with “Dream In Moscow.” In Terra DCognita? (The Music of the Rock Opera Magic Musical Man) is a musical phenomenon. Not only is it an impactful recitation of wonderful instrumentation, but, the listener is gifted with a culture shock of all different languages and origins.

JJ Chardeau is certainly a man of uniqueness. As seen throughout this album, Chardeau does not limit himself to one particular styling or sound. Instead, he will push boundaries to see great success in his work and artistic expressions. For over 30 years, he’s been making Progressive Rock all his own and bending every rule he can.

“Dream In Moscow” is a beautifully written out build-up of battle or struggle. It begins as an illuminating piece, soothing the listener’s ear with a piano intro, as the orchestra and Chicago’s Danny Seraphine, along with Jethro Tull’s Martin Barre lending their voices to this piece amongst others throughout the album. “Black Taj Mahal” is a good contour for the prior track as the chimes, flute, and what sounds to be a triangle echo out a mental escape to a serene picturesque land.

“Farewell Lhassa” is another ode to a foreign area, China. One that offers up a more haunting vibe of chimes and an occasional gong and guitar riff. Voices arise of an alert message that conflict has now arisen and materials (missiles) have been stolen, almost as though someone has been compromised. This is followed up by another strictly instrumental piece.

Filled with the xylophone, keyboard, and drums to keep the rhythm in place, “DMZ” bridges the album together keeping a steady relaxed tone throughout the track. Leading into “Frisson Nippon,” is a thrilling, excitement lead-up of chimes and whistle-into-chant. It feels as though the song is taking the listener sailing through steady waters or hiking up to conquer some challenges on land or sea. “Les larmes du pacifique” starts as a tropical island getaway, going into a tragic song of tears and struggle.

“Nunavut,” is a hushed and fluted piece that has a god-like messenger speaking throughout. It sounds as though, a mission is being explained or what might be next to come on the listener’s journey, wherever the figure may be thinking of. Then we approach “The Last Rockaway.” It is different and fun from the rest of the record where it feels more like a classic rock n’ roll song. It asks of the individual’s humble beginnings as he is the sole person left of his own.

“Pablo Tequila” is a fun international song that throws even the most anti-dancer into a hip-shaking good time. It is a simple feel-good song that poses as a rarity for the record. Following that up, “Machu Picchu” is a strictly instrumental styled piece that has a very simplistic sound to it. A piano at the beginning and end, a flute, and some percussion give life to this song as it sends the listener through another conflict-to-resolution type of scenario; ending with a serene resolution.

Heading into what sounds like a Middle-Eastern piece, the majority of “Cabale Kabyle” is an easy, melodic tune that appeals well to the average listener. Towards the end there seems to be a bit of struggle or issue of sorts but, within a minute the struggle resigns to more of the strings ending the tune with peace. Next, “Walls of Lament” (the single off the record), gives a feel to me like a spy movie. It reminds me of where the spy or hero is trying to get past the laser-covered room to reclaim his stolen artifact. But, by the middle of the song, it becomes something back into a foreign land to adventure through thickets of fog as the listener wanders.

“Tchad” is probably the most complicated of the tracks to understand to a person whose only language is English. It sounds as though the vocalist is proclaiming the area their own. The fact that they will not go down without a fight shows their strength and resilience to protect what is theirs. This, combined with the finale of “The End” leads to a very powerful finale. The brightness and intensity show how to end a story properly.