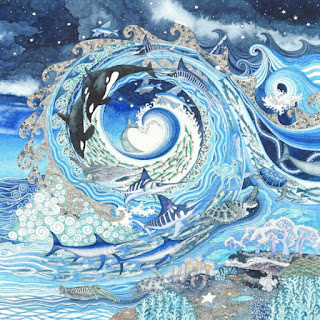 Pendragon came into existence way back in 1978 and just a couple of weeks ago were onstage in Kin-ross, Scotland for a concert showing the band is still going strong. They have released 11 studio albums from the debut in 1985, Jewel, up to the release under review at this time, Love Over Fear.

The band on this album, comprises Nick Barrett (lead vocals/guitar), Clive Nolan (keyboards/backing vo-cals), Peter Gee (bass/bass pedals/backing vocals/keyboards) and Jan-Vincent Velazco (drums/percussion). Nick and Peter are original members, Clive has been a member of the band since 1986 and only the drummer has changed several times. All in all, the band seems to be fairly settled.

The opening track is, as always, an important moment when listening to a new album, as it really should be getting across the idea that “this is good, you need to listen.” “Everything,” (5:40) is the opening track and it certainly ticks all the correct boxes. A great organ passage, with a terrific hook, opens the show before a time change suddenly drops the gears a bit before the guitar gets to shine then the excellent vocals of Nick appear. More time changes carry the track onward until the return of the vocals, prior to another superb guitar passage. There is then a return to the starting theme of the track and a gentle wind-ing down to the ending.

The last track on the single CD is “Afraid of Everything” (5:08) and is structured in a similar manner to “Starfish and the Moon,” with beautiful vocals, this time fronting a gentle guitar theme. The music slowly builds in the background, but never intrudes before moving into an almost “Camelesque” style guitar theme (I’m not sure that is a word, but it conveys the style of guitar playing). The track then gently builds before slowly fading out to end a very impressive album.

Having been a fan of Pendragon music earlier in their career, my opinion was that their best work was from 1991 to 2001, when they released 4 excellent albums. My interest then drifted a little but this album, has certainly returned this fan to the fold. It seems to have managed to reach those earlier heights and overall is an excellent release. Love Over Fear is an album that should appeal to the majority of neo-prog/symphonic prog fans and is a terrific addition to any CD collection.