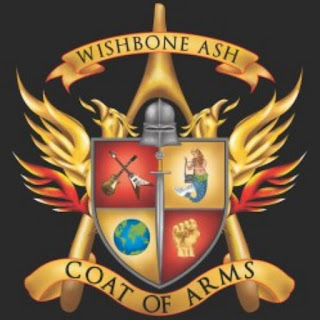 Wishbone Ash was formed back in 1969 and is still active at this time, as shown by the release of Coat Of Arms, the album under review. They have released 28 studio albums from the self-titled debut in 1970 up to this point. One original band member is still present, Andy Powell (vocals/guitar) and together with Mark Abrahams (guitar), Bob Skeat (bass) and Joe Crabtree (drums), the band has issued a very pleasing album.

As normal, I have chosen to highlight three tracks from the album which I find particularly good after several hearings, but this was a difficult choice as I found the whole album was extremely good.

I will always lead with the opening track which, regular review readers will know I think sets the scene for what is to come. “We Stand As One” (4:16), commences with a short drum intro leading into a simple, but insistent, guitar riff which the listener cannot ignore. The smooth vocals of Andy Powell are as good as I remember and the guitar riff takes its leave but returns as the track progresses. That guitar hook makes “We Stand As One” an excellent opening track and makes the listener eager to sample what follows.

“Coat Of Arms” (7:55) is the title track of the album and it is a guitar passage that starts this track, leading quickly into the clear vocals and moves to another guitar riff that hooks the listener again. Neat interplay between the guitars of Andy and Mark moves the track on and there is a sense of feeling very comfortable with what the band is doing. Around the halfway point there is a section of blues guitar which evolves into a more up-tempo, dare I suggest foot-tapping, guitar passage. Entering the last 2 minutes, the earlier guitar riff reappears and brings the track full circle before winding down to the ending. This is an excellent follow on from the opening track and although some of the upcoming tracks don’t have such obvious hooks, they are by no means there as fillers.

The final track on the album, “Personal Halloween” (5:38) starts up with that superb blues style guitar and is well served by Andy’s vocals as it evolves into a real southern laid-back slice of music. The dual guitars again weave their magic and this is one of my favorite tracks.

I will admit that my first listen to Coat Of Arms did not impress me much but by the time it had been played a couple of times more, those amazing guitar hooks had certainly embedded in my grey matter. I don’t think that the music “sets the heather alight “ and if you are looking for an album that will “blow you away” Coat Of Arms probably isn’t it. If, however, you give this album a few listens, I can almost guarantee that you will find yourself whistling, humming or even singing along to most of the tracks. This is an album that possesses the “feel good” factor, so give it a try, you might be very surprised.