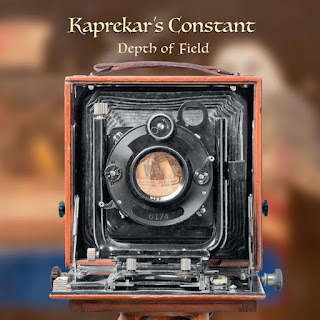 Kaprekar’s Constant was formed in London in 2016. To be honest, it was more of a rock commune than a simple band, as it involved multi-instrumentalists, specific instrument musicians, vocalists (singing and spoken word), a painter, a photographer, and a web designer.

As I said, this group of individuals is so much more than a simple band. Keen-eyed prog aficionados will have noticed the presence of a name that has a real prog pedigree from way back, David Jackson, from the superb Van Der Graaf Generator, and Dorie, is his daughter.

The debut album, Fate Outsmarts Desire was issued in March 2017 and was a huge hit with the music critics, and indeed, for a debut, it was a stunning collection of tracks. Album No. 2 has now appeared, Depth Of Field, and picks up where the first album left off.

Depth Of Field is a 7 track album running to just under 68 minutes, with “White Star Sunrise” the longest track on offer at 23:43 minutes, and the final track, “Depth Of Field,” clocking in at just over 2 minutes (2:09), the shortest.

Kaprekar’s Constant play a very gentle, enveloping style of prog which encompasses folk elements and can be multi-layered and bring in beautiful arrangements. To try to make a comparison is difficult but the closest band is probably Big Big Train, but Kaprekar’s Constant has a uniqueness about them. The members involved in the new album are Bill, Dorie, Al, Mike, Nick, and David.

“Ghost Planes” (10:40) is track 3 on the album and is a superb piece of music together with some thought-provoking lyrics. Making use of the stunning musical abilities on offer, this track starts with the band grabbing the listener before using old audio clips and spoken phrases backed by a very simple piano passage that takes over. Enter the male vocal (Bill) to set the scene and the listener is transported back in time to when the German “Doodlebug” bombs rained down on London and other areas. The use of the female voice (Dorie) simply adds to the overall aural soundscape. By this point, around the halfway point in the track, the listener has been pulled in, hook, line, and sinker. The tempo builds up into a driving instrumental passage, maintaining the listener's interest before the music drops into the background allowing some more audio clips to be used. Not only do you get a superb melodic piece of music, but also a snapshot of a moment in history.

The epic track No 5, “White Star Sunrise” which stretches out to 23:43 minutes, traces the story of the vessels which comprised the Olympic class of the White Star Line. There were three ships, Olympic, which had a successful career as a large luxury ship, Titanic, which dramatically was lost on its maiden trip in 1912 and Brittanic, which was used as a hospital ship in WW1, which hit an underwater mine and sank in 1916. Each part of the 3-part story works wonderfully well and provides the listener with another glimpse into history. Musically, this suite is majestic, from the intro music to the sound effects of the sea and then onto the first main passage in such a way that the listener has already become immersed in the track. The male and female vocals again take turns and this adds another dimension to the superb flow of this track. Small guitar passages adorn the main theme and provide little hooks before a complete change of style, around the 6:30 minute point, when the music becomes folky with flute and whistles expertly interspersed by David J. The suite continues to ebb and flow taking the listener along on the voyage.

I was blown away by the debut album, but this release, Depth Of Field, has taken the band up a few more rungs on the excellence ladder. I have been asked a few times, in my alter-ego as a radio presenter, if I have come across an album I would describe as a “perfect 10,” and I still haven’t, although this release comes very close. As I have said, Kaprekar’s Constant is a mellow pastoral sort of bunch, but I would suggest getting hold of this album, settling down comfortably with the lyric sheet and you will discover a majestically crafted album worthy of inclusion in anyone’s collection.