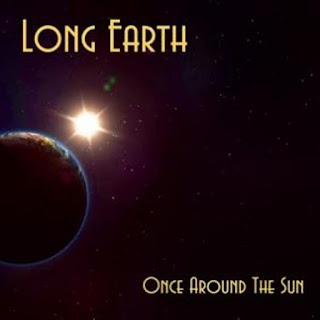 Once Around The Sun is the title of the second release by Long Earth, and is the follow-up to the debut, The Source, in 2017. At first glance, a person might think that this is a new young band to the prog scene, but that would only be partially correct. Long Earth is a new band, but these guys have been around the scene for a good number of years. (I’m not sure I should say exactly how long.) The band comprises 5 members, Gordon Mackie (bass), Ken Weir (drums), Mike Baxter (keyboards), Renaldo McKim (guitar) with Martin Haggerty (vocals since 2018) replacing Neil Mackie (vocal and guitar on the debut) and have known each other from different bands over the years. Three were in Abel Ganz, two were in Identity Crisis and Mike, Ken, Gordon, Renaldo and Hew Montgomery (Abel Ganz/Grand Tour, as well as being the motivating factor of Long Earth, and co-producing both releases) all played at the same Glasgow festival in the ’80s, albeit with different bands.

To sum up, Long Earth is a new band, but there is a wealth of musical experience in the band. The debut, The Source, was eagerly awaited by the crowds of prog followers that knew of Long Earth and had seen them live, and it was very well received upon release. The follow-up, Once Around The Sun has consolidated Long Earth as being a leading light in the modern prog community.

Once Around The Sun, is a 6 track album clocking in at just under 67 minutes (66:55), with track 3, “Man In The Mirror,” the shortest track at 4:16 minutes and the final and title track, the longest with a running time of 33:06 minutes. This track is also split into 4 parts, Spring, Summer, Autumn, and Winter.

The opening track, “We Own Tomorrow” (8:06), starts by generating a little hook and a superb bass riff by Gordon, then into a soaring keyboard passage. New vocalist since 2018, Martin Haggerty, has a powerful voice and the overall effect is of excellent prog music which the listener becomes very quickly comfortable with. Recurring little hooks and Martin’s voice takes the song on with the return of that superb bass riff from Gordon around 5:15 minutes and a chance for Renaldo to show his superb guitar skills from 5:50 minutes and to then escort the track to the end of it’s running time. A wonderful start to a stunning album and the listener is eager to hear more.

The epic finale to the album, the 33:06 minute “Once Around The Sun” is split into four parts, spring, summer, autumn, and winter. The four seasons cover a year, hence the album title, as it is the time taken for the Earth to orbit the sun. The storyline mirrors the seasons as it tells the tale of a romance encompassing the hope and joy of the fledgling relationship in spring, the building of the relationship in summer, the start of doubts in autumn, and finally the ending of the relationship in winter. The lyrics convey the journey excellently and the very expressive vocals supplied by Martin, together with the sympathetic music, carry the story line majestically.

Musically, the suite goes through phases with spring being represented by an acoustic start and a very simple melody. Summer has excellent keyboard passages underpinning the vocal as the story unwinds. As summer draws to an end, the music becomes very atmospheric and melancholic as it weaves to an ending. Autumn begins with an orchestral feel before again echoing the melancholic section 2, which fits the lyrical content beautifully. The final section, winter, commences with a superb melodic opening with some excellent strings adding to the atmosphere. There is a repeated series of verses, guitar passages and keyboards plus string sections prior to Martin taking the storyline to its inevitable conclusion. Renaldo has a beautiful repeating guitar passage just before Martin brings the ending with the lyrics, “Once around the sun, but no further on. Once around the sun and our race is run.”

A stunning ending to a superb album where all the musicians have excelled. Mike with majestic keyboards, Gordon with those excellent bass runs, Ken keeping everything firmly anchored on drums, Renaldo with some exquisite guitar work and finally, Martin providing the evocative, emotive vocals.

All in all, this is a stunning follow-up to the debut, showing how the band has evolved into an excellent unit. Don’t delay, just go and get a copy of Once Around The Sun and sample what is a masterpiece of modern prog with huge leanings to the “old style,” played by musicians who have dreamed the dream and have now delivered the dream. The dream has a name, and the name is Once Around The Sun.